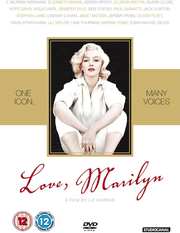 From a documentary about a legendary director, to one about a legendary actress, yes folks we leave you this weekend with the news that Optimum Home Entertainment are releasing Love Marilyn on DVD this 28th October.

Presented in its original 1.77:1 aspect ratio with both 5.1 Dolby Digital and Dolby Stereo soundtracks, it will carry an unusually high 18 certificate, and a recommended retail price of £19.99.

Marilyn Monroe invented her public persona at the expense of concealing a private side known only to her close confidants. Fifty years after her death, her creation still blazes brightly in our cultural imagination, while the creator continues to lurk in the shadows.

Drawing on never-before-seen personal papers, diaries and letters, Academy-award nominated director Liz Garbus worked with acclaimed actresses to evoke the multiple aspects of the real Marilyn, passion, ambition, soul-searching, power and fear, in an absorbing and astonishing portrait. These documents, brought to life in this film by some of our contemporary icons and stars, give us a new and revelatory understanding of Monroe, revealing her carefully guarded inner life.

Marilyn Monroe was a woman who did not believe true love was possible and yet sought it all her life. This is an actress who at the height of her fame abandoned Hollywood to study acting with Lee Strasberg, in a room of resentful unknowns, because she wanted to be taken seriously. In Marilyn Monroe, the magic of a once-in-a-generation talent, and the reality of so many women caught between strength and insecurity, love and career, are amazingly united.