Blu-ray
The Secret of Kells 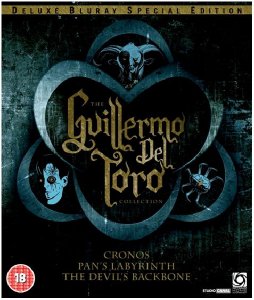 Mexican director Guillermo Del Toro is recognised as one of the world's most spectacularly inventive filmmakers, balancing visually stunning blockbusters (Hellboy and Blade 2) with smaller, personal projects such as the three revolutionary films brought together in this Blu-ray collection- THE DEVIL'S BACKBONE, PAN'S LABYRINTH and his debut feature, CRONOS. All three picture masters for this triple boxset special were supervised and approved by Guillermo himself and the effect is a visually enchanting masterpiece.

In each of these three beautifully haunting films, Del Toro weaves together black fairy tales with bleak reality. Guillermo has given film fans some of the most intelligent films in modern cinema and this box set perfectly showcases truly incredible talent.

Delve even deeper into the magical fairytale horror of the Guillermo Del Toro Collection with fabulous DVD extras such as behind the scenes footage, cast and crew interviews, featurettes aplenty and audio commentary from Guillermo himself.

The earliest of the movies in the box set is the acclaimed Cronos. Released in 1993, it's an inventive and compassionate reworking of vampire mythology, a story of family loyalties as well as alchemy and vampirism.

An old antiques dealer, Jesus Gris, finds a mechanical device called the "Cronos device." Whilst holding the Cronos it springs open and its metallic legs pierce Jesus' flesh. Once "bitten," he develops a craving for human blood, and his body grows more and more youthful with each drink. As the addiction spreads through his body, he realises he desires the blood of his innocent granddaughter...

Cronos is peculiarly compassionate, approaching the question of immortality poetically as well as horrifically and humorously.

2001's The Devil's Backbone is a deliciously dark horror that tells the tale of a remote Spanish orphanage during the final days of The Spanish Civil War. Its young inhabitants are brutally terrorised by a spirit that stalks the building's dark decaying hallways. A story of orphan children battling for survival against the spirit-world building up to a grisly, explosive finale where the children unravel the truth behind the spirit's haunting.

Pan's Labyrinth, released in 2006 to critical acclaim, mingles real life politics and social drama with fantasy and magic to create a masterpiece of modern cinema. An imaginative gothic fairytale for adults set in Spain during World War II, Pan's Labyrinth is a beautiful, charming, graphic and deadly story of a young girl's journey to her own fantasy world, created in order to escape a cruel and harsh reality. Entering a mysterious and enchanting world of fairies, fauns and giant frogs, she is told she must accomplish three gruesome, assignments before being able to see her father again.