DVD
Office, The Series One (UK)

American version of The Office: Season 5 arrives on DVD in February 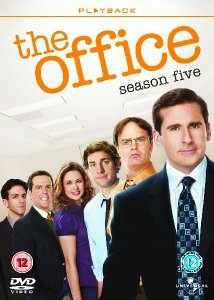 LIFE GOES ON AT DUNDER MIFFLIN AS THE FIFTH SEASON OF THE OFFICE: AN AMERICAN WORKPLACE ARRIVES ON DVD

The Office: An American Workplace returns to DVD for its fifth hilarious season on 7th February 2011, courtesy of Universal Playback. And with the series celebrating its centenary episode, Season 5 offers fans even more to get excited about that usual!

Water cooler moments from this series include the team becoming obsessed with their weight during a "Dunder Muffin" eight week summer diet initiative, the office getting robbed due to Michael and Holly staying late to have sex, the office having to spend an extra $4,000 to ensure they receive next year's budget. On top of that, Dwight and Toby get fired for planting salad on Toby's desk and pretending the plants are "drugs", Phyllis's Moroccan-themed holiday party is interrupted when Meredith's hair catches fire during a drunken belly dance and the staff share their worst break-up stories and band together to host a "Lonely Hearts Party" where they root for Michael's would-be romance.

With extras including the brilliant 100 Episodes, 100 Moments and a fascinating featurette entitled The Academy of Arts and Sciences Presents: The Office, Season 5 is an essential purchase for fans old and new. Also available is The Office: An American Workplace Seasons 1-5 box set, giving fans and newcomers alike the chance to own the entire collection of this modern comedy great.