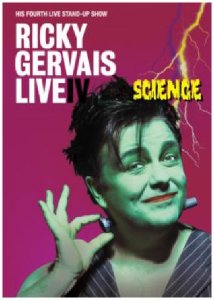 
Following a complete sell out tour and filmed live at London's Hammersmith HMV Apollo, this is the hilarious fourth live smash hit stand up show from Ricky Gervais, which will be released on DVD on 22nd November.

Never afraid to challenge comedy boundaries, Ricky is renowned for his acerbic observational humour and cutting delivery. Set on a stage designed to look like Frankenstein's castle laboratory, this show brings together thought provoking rants and tongue in cheek political incorrectness about subjects as diverse as religion, racism and obesity.

One of the highlights of the show is every atheist's dream; Ricky dissects an old school book that tells the story of Noah's Ark.

As well as the critically acclaimed show, the DVD also features an exclusive extras package containing a tour diary with behind the scenes footage, an interview with Karl Pilkington and Warwick Davis plus a candid chat between Karl and Ricky.

"Ricky Gervais is the height of modern entertainment." John Cleese

"Ricky Gervais absolutely kills me every time I see him." Jerry Seinfeld

"One of the funniest comedians I've ever seen." Chris Rock

"Tasteless and unfunny." The Daily Mail