Blu-ray
Back To The Future Trilogy
Related Articles

John Bishop Live on DVD and Blu-ray this November 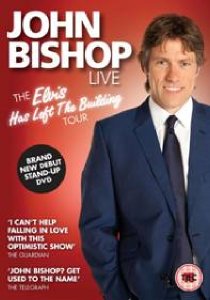 Following his sell out UK tour, multi award-winning stand up comedian and star of his very own BBC One series, John Bishop releases his hotly anticipated debut DVD. Filmed at the Liverpool Empire, 'John Bishop Live' sees the comedian delight his home crowd with the smash hit, Edinburgh Comedy Award nominated show: 'Elvis has left the building'. 'John Bishop Live' will be available on DVD, Blu-ray and on iTunes from 15th November 2010.

PRAISE FOR 'ELVIS HAS LEFT THE BUILDING'
"Bishop has funny bones" The Times
"I can't help falling in love with this open, optimistic show"
The Guardian
"Frankly hilarious" The Telegraph
"Stand-up fans should sell their mums to bag a ticket for Bishop" Evening Standard

Since giving up the nine-to-five grind John Bishop has been spending lots of time at home hoping that things will happen and that they'll turn out to be funny. Luckily the antics of his teenage sons have proven to be a relentless source of comic inspiration. The result is a must-have DVD packed with hilarious analysis of their blasé attitude to his chosen career, the changes that occur once your eldest son is big enough to size up to his Dad as well as reflections on the peculiarities of 21st Century family life.

As well as being able to re-live the hugely memorable live experience of John Bishop's stand-up - or experience it for the first time in your living room - 'John Bishop Live' on DVD and Blu-ray is packed with exclusive extras which include:


John will be back on the road with his new show 'Sunshine' from 10th October and stars in Ken Loach's new feature film 'Route Irish' (autumn release). Brand new comedy show 'John Bishop's Britain'airs at 9:50pm Saturday on BBC One up to the end of August. Other recent TV appearances include: 'Live at the Apollo' (BBC One) - which achieved 7 million viewers: the show's highest ever viewing figures, 'Have I Got News for You?' (BBC One), 'A League of their Own' (Sky One), 'Friday Night with Jonathan Ross' (BBC One), 'Michael McIntyre's Comedy Roadshow' (BBC One), '8 out of 10 Cats' (Channel 4), 'Mock The Week' (BBC Two) and 'Skins' (E4).