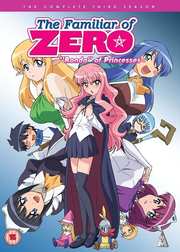 I admit that I’m always looking for something new from anime, something that I haven’t seen before, to keep things fresh and exciting. The biggest problem with entertainment for me is that it eventually goes stale. The advantage anime has is that it’s a medium, not a genre, so you can always be guaranteed of something new around the corner. MVM recently announced that they had licensed Flowers of Evil, which certainly fits the bill of being different, experimental. On the other hand, there’s something to be said for comfort and familiarity. There’s something to be said for evoking a feeling of nostalgia, and that’s what I have found in the first two seasons of Familiar of Zero released here by MVM, produced towards the end of the last decade. Its tale of a tsundere witch, and her perverted familiar harks back to the kinds of romantic comedy anime that got me into the medium in the first place, shows like Love Hina, but done with a greater emphasis on story, and with modern standards of animation. Now that the next instalment is here, I get to see if Familiar of Zero Season 3: Rondo of Princesses keeps on ticking the right boxes for me. 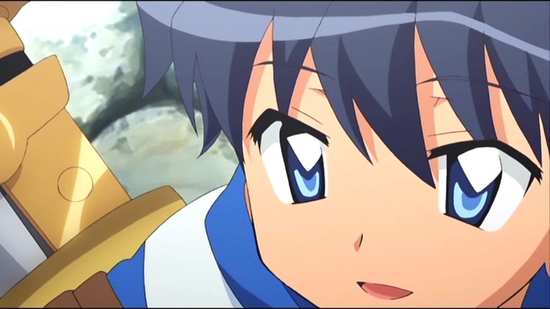 The Institute of Magic in the Kingdom of Tristain attracts the highest calibre of nobles to its classrooms. It’s a world where social standing is determined by one’s faculty with magic; mages are the nobility, everyone else is peasantry. And the proudest noble student of them all is Louise Francoise Le Blanc de La Valliere, despite her inability to successfully cast a magic spell. The record of destruction and explosions have earned her the nickname Louise the Zero, which makes the Familiar Summoning Ritual as she starts her second year of magic school all the more important. It’s when the students call forth the magical animal that will be their trusted companion for the rest of their lives. Some summon dragons, other summon salamanders, or owls, or moles... When it comes to Louise, she summons forth a human! 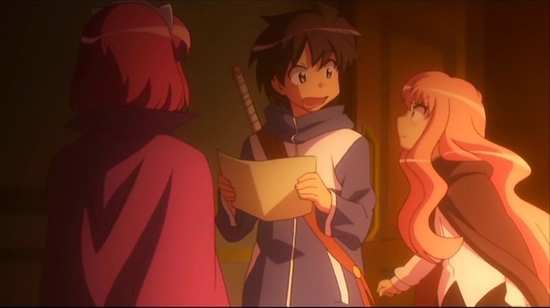 Saito Hiraga was just happily minding his own business in everyday Tokyo, when all of a sudden a portal opened up and sucked him in, depositing him in a fantasy magical world with two moons, where no one speaks his language, where people cast magic spells, and where he’s expected to be the servant of an obnoxious girl who’s a little too loose and free with the riding crop, and who wants him to wash her underwear! But it’s too late. He’s a familiar now, and bonded to Louise. She’s sealed the contract, and the runes marking him as hers have appeared on his hand. Only they’re not the usual familiar marking runes. And it turns out that this isn’t the first portal that’s opened between the two worlds. If Saito can figure out how this world works, maybe he can find a way home. As for Louise, she’s got her hands full training her new familiar. Everyone else got magical animals. All she got was an obnoxious peasant. 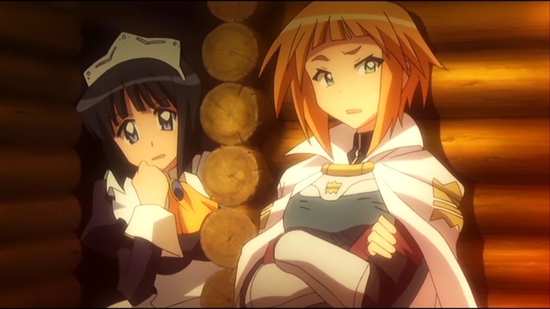 Season 2 saw Louise and Saito go off to war in service of Tristain, against the kingdom of Albion. A series of initially simple victories turned into an unexpected reversal, and Saito made the ultimate sacrifice to allow Louise to escape. Or so everyone thought, as at the end of the season, Saito returned, hale and hearty. As Season 3 begins, peace with Albion has been achieved, and Louise and Saito are about to take their relationship to the next level, and then the runes on Saito’s hand disappear. He’s no longer Louise’s familiar. He no longer has Gundolf powers. He’s just a normal peasant now, and that could mean the end of his relationship with Louise. Louise wants her familiar back, and the secret might be held by Tiffania, the fairy that brought Saito back to life. But there are more clandestine plans and plots unfolding, and Louise learns that she’s not the only Void magic user around, and other Void magic users have human familiars too. 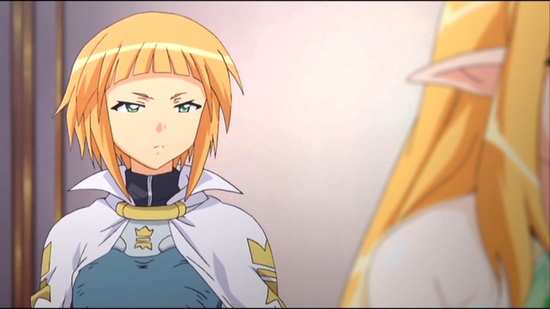 Season 3 of Familiar of Zero is presented across two discs by MVM, 13 episodes in total. The series is also being released on Blu-ray on the same day as this DVD release.

Disc 1
1. The Familiar’s Mark
2. The Fairy of the Forest
3. Return of the Hero
4. The Conspicuous New Student
5. The Alluring Girls’ Bath
6. Forbidden Magic Powder
7. The Sleipnir Ball 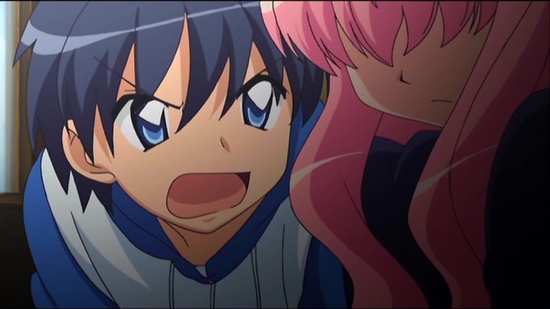 Familiar of Zero: Season 3 gets a 1.78:1 native PAL anamorphic transfer on this disc. As before, the image is clear and sharp throughout, pleasantly detailed, with simple but effective character designs and a bright and bold colour scheme to its comic fantasy world design. The animation is fluid and effective, if not overtly extravagant. The show does what it needs to tell its story in an entertaining and engaging way. It also scales up to an HD display without any issue. I have to wonder, given its simpler aesthetic, just what the Blu-ray will add to the presentation beyond just a deeper colour depth and the original frame rate and audio pitch. 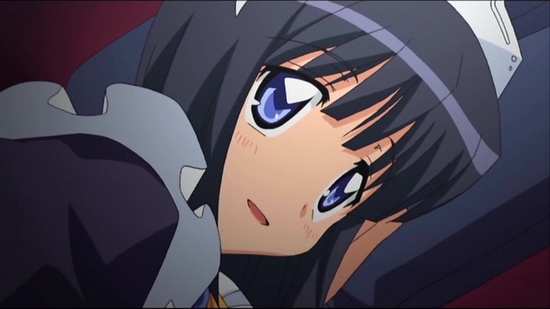 Just a DD 2.0 Japanese track, with optional translated (white) subtitles. The Japanese audio is fine, especially in a show that reunites Shakugan no Shana’s lead actors, Rie Kugimiya and Satoshi Hino as the main characters here. The two shows have absolutely nothing else in common, but there’s still a degree of familiarity in hearing Rie Kugimiya beating up on a hapless Satoshi Hino. The rest of the cast create similarly engaging characters, and the dialogue is clear throughout, the music quite likeable. 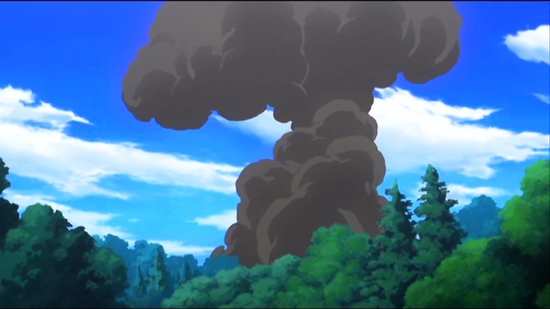 The discs present their content with static menus. The sole extras are on disc 2, and boil down to the usual of textless credits and trailers for Hakkenden – Eight Dogs of the East, Super Sonico, and Devil Survivor 2. 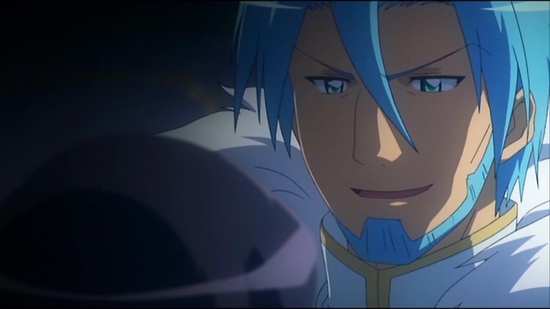 Familiar of Zero Season 2 was something of an odd duck in retrospect. Season 1 had established the show as something of a traditional harem comedy with a magical twist, featuring a perverted male lead and a tsundere female. It focused mostly on the harem hijinks as you would expect, while the occasional bit of narrative cropped up, to build things up to a more serious finale. Season 2 on the other hand really went halves with the show, fifty percent harem comedy, and fifty percent narrative, so that while Saito was being perverted, and Louise was exploding in rage, we also got to learn about Knight Chevalier Agnes’ search for revenge, and the growing war against Albion. It was a different way of doing things, but just as entertaining as before. 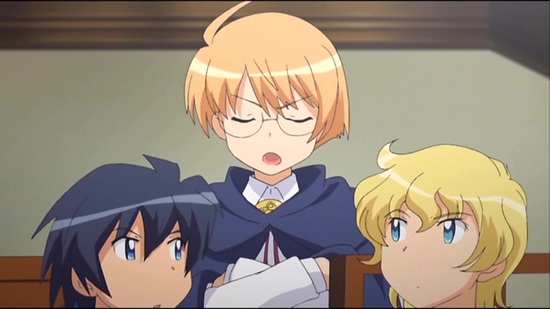 With Season 3, we’re back to normal service so to speak. It’s harem comedy all the way through, with the occasional reminder of an ongoing storyline, but one that really only makes its presence felt for the final few episodes. At the end of the previous season, Saito returned apparently resurrected following a fatal last stand during the war. The repercussions of that resonate through the first few episodes, with Saito’s having died effectively cancelling his contract with Louise, and taking away his Gundolf powers to boot. This might have been an interesting direction to take the show, examining the central relationship without the contract, seeing if Louise and Saito are destined to be together even without the magic. Alas the story resolves this in the space of just a couple of episodes by restoring the contract and returning to the status quo with the main characters. 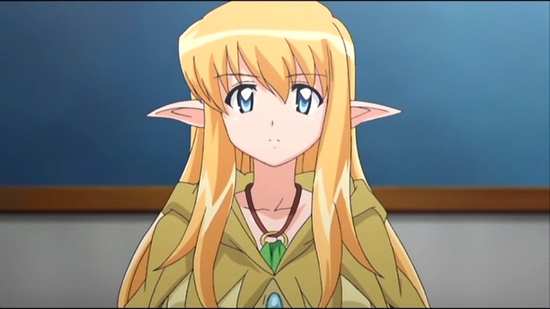 I was initially disappointed by this, but when they got the mission to find the fairy that brought Saito back to life, we find that the fairy is no fairy at all, but a big-breasted half-elf named Tiffania, a girl who has something of a crush on Saito as well. Louise is sensitive about her lack of development in that area at the best of times, but Tiffania is so well-endowed that even Siesta winds up feeling inadequate in comparison. This show being traditional otaku wish-fulfilment, there comes a scene where Tiffania asks Saito to feel her breasts, to check if they are ‘normal’, at which point Louise busts in and punishment ensues. 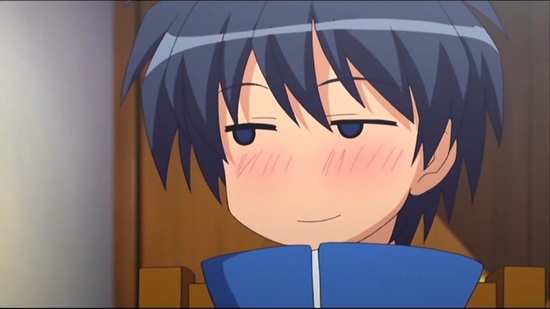 It’s pretty much harem comedy for the majority of the episodes, in the classic anime vein that I appreciate so much, with Saito at least having an interest in women, as opposed to the modern definition of a wimpy harem male lead, and Louise a classic tsundere apt to explode at the best of times, without any of the fine gradation or categorisation that so subdivide female characters in modern shows. We get an episode where the male students try to take a peek at the girls’ bath, we get a love potion going out of control, and we get a school ball where the girls’ rivalry over Saito comes to a head. 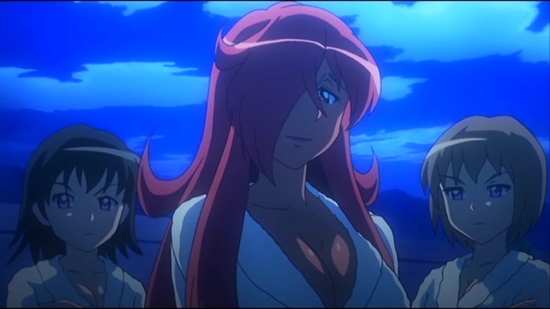 If there is one thing different in this season, showing that the story is moving on, it’s that Louise’s feelings for Saito have developed to the point that she’s less liable to explode than to just feel hurt and betrayed when his eye strays. It becomes even more complicated when it seems that Princess Henrietta is developing affections for Saito as well. 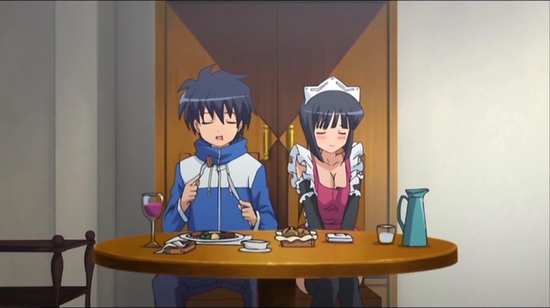 The plot returns with a vengeance for the final four episodes. Early on we meet Sheffield, another human familiar contracted to a Void Magic User, and this mysterious user is plotting and scheming as the season unfolds, trying to find and capture other Void users like Louise for his own dark schemes. There are one or two attempts during the early episodes, but the villain’s identity only becomes clear at the end, when fellow student Tabitha is drawn into the plot. Sheffield has a power over Tabitha and her family, and can blackmail her into acting against Saito and Louise. In the end Tabitha can’t go through with it, and is captured and taken back to her home country of Galia. The final four episodes follow Saito, Louise and their friends as they decide to go and rescue Tabitha. It’s entertaining, dramatic, as well as funny and saucy, and it’s a good conclusion to the season, but the only misstep here is the return of a character that was thought to have died in Season 2. One resurrection ought to be the limit for a series 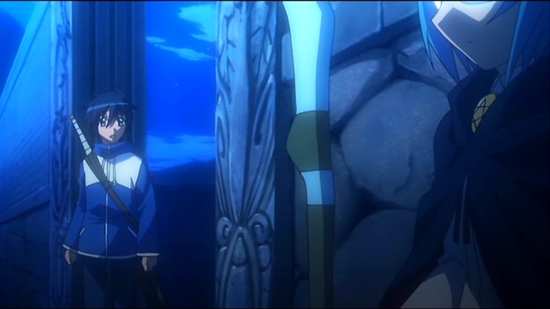 To top it all off, we get an OVA episode, the obligatory beach episode for a harem comedy. All through history, items from our world have been magically transported to the magical world, which is why Saito was flying a Zero fighter during season 2. But in the OVA episode, headmaster Osman has found a case full of swimsuits, one pieces, bikinis, and items of even greater brevity, so he organises a school trip to the beach, and creates a few ancient traditions for the girls to adhere to, to get them out of their modest attire and into something sexier. And yes, there’s a giant octopus with roaming tentacles. 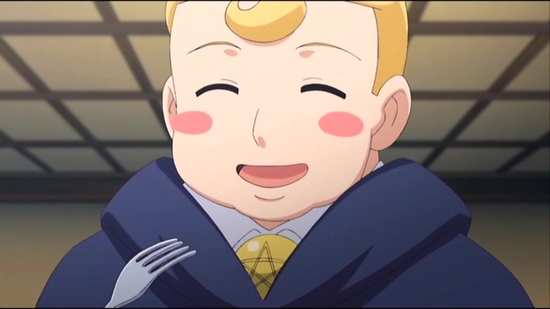 Familiar of Zero might not be to all tastes, but it is the kind of comedy show that informed most of my early anime viewing, and while there’s something nostalgic about looking at something in this vintage storytelling style, the quality of the animation makes it palatable for today’s viewers as well. The first three seasons of Familiar of Zero were made around 2006-8, but the fourth season came some four years after in 2012. When MVM get around to releasing it, it will be interesting to see if the creators can maintain the same quality and style. Hopefully it will be as good as Rondo of Princesses, which you can now get on DVD and on Blu-ray.