Review added by
Jitendar Canth
Places to Buy
The Familiar Of Zero: Series 4 Collection [DVD] by Yoshiaki Iwasaki
Not available

The Familiar Of Zero: Series 4 Collection 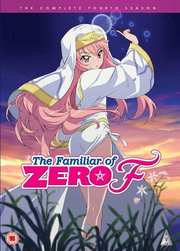 Synopsis:
Their relationship has been building ever since she first accidentally kidnapped him from Earth, but even with all they've been though together, are Saito and Louise ready to take their relationship to the next level? The answer, sadly, will have to wait, as once again events in Halkeginia are running out of control and Saito and Louise find themselves, along with several other Void Mages, pressed into service to save the world.

And while any mission involving Void Magic is sure to suck at some point, the suck-age is certain to be compounded by the fact that one of the mages they'll be working with is the amply endowed elf Tiffania. Who may have designs on getting familiar with Saito herself. Betrayals, reversals and the inevitable side trip to the hot springs lie ahead as the evil plots get plottier, the dysfunctional relationships get even more dysfunctional, and lots of stuff goes BOOM for only vaguely justifiable reasons!