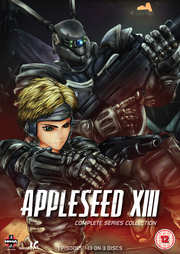 Synopsis:
Following a global conflict that resulted in the extermination of half the world’s population, a utopian city nation has risen from the ashes and ruins of the war. Olympus is a shining beacon of human civilization, governed by a near-omnipotent computer known as Gaia and maintained and managed by a majority population of artificially created half-human, half-robot Biodroids whose duty is to ensure the wellbeing of the minority human populace. But there is unrest within this seemingly perfect paradise. Racial, religious and political differences continue to cause unrest amongst the people and a terrorist group known as the Human Liberation Front threatens to destroy Gaia and the Bioroids in the name of human “freedom”.

Helping to ensure security in Olympus and to combat the HLF threat is an elite Special Forces organisation, ES.W.A.T. Amongst its team members are Deunan, a young female agent, and her cyborg partner and lover, Briareos. As they continue to deal with the complications of their own relationship while together having to confront terrorism, government conspiracies, corrupt corporations and the ongoing development of deadly military technology, their story and their search for their own Eden becomes the true story of Olympus.