Wakanim.tv Comes to the UK

We have a new online anime service coming to the UK. All the Anime’s Andrew Partridge and Wakanim’s Olivier Cervantès made the announcement this weekend, heralding a new approach to delivering anime online in the UK. Separate from the subscription streaming model, Wakanim will offer download to own options. The announcement came with the first two series available to view revealed as Kill La Kill and Samurai Flamenco, two shows which had conspicuously irritated UK fans by being geo-locked on Crunchyroll.

Until the wakanim.co.uk site starts up, new episodes will be posted on Anime Limited’s site for streaming only. And don’t be too concerned at missing out on the newest shows, as Wakanim will stream the shows ad-supported for free for one month after initial broadcast, during which time you’ll also be able to download a time-limited version of the show to watch as well. After that initial month, a small fee per episode will allow it to be streamed, while a little more will allow you to permanently download a DRM free file. At the time of writing however, Kill La Kill will be streaming only, although Samurai Flamenco will have download options. The free options are available in SD and 720HD, while the premium options will be higher quality. Let’s hope this doesn’t go the way of Anime on Demand.

Incidentally, it seems all-change in online anime distribution in France. While Wakanim is expanding to the UK, Kazé’s Anime on Demand, having apparently retreated from the UK has merged with what used to be Crunchyroll’s French outlet, Genzai.fr to become Anime Digital Network. At the same time, Crunchyroll have opened their own dedicated French website.

AnimEigo, who released Bubblegum Crisis on DVD in the US (MVM released it here), have been putting the feelers out regarding a kickstarter for Bubblegum Crisis on Blu-ray, of similar quality to the Japanese Blu-ray release. If the fan response on forums is any indication, they should forego the kickstarter and just go straight to production. But judging by the tentative proposal (the kickstarter isn’t live yet), they have some very delectable ideas for the release, including the world debut of AD Police on Blu-ray. 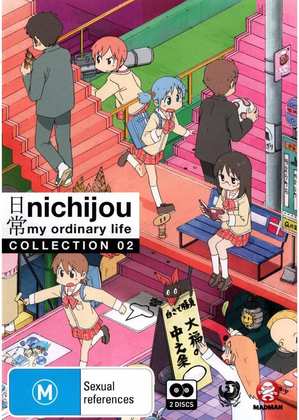 Two reviews for you this week, and they take us from the sublime to the... well... crap. I guess I should have watched them the other way around, as with Nichijou: Part 2, I rediscovered the best anime comedy around. When I reviewed part 1, I found a show that placed these tantalising pieces of a puzzle on a table, little bits of funny that tickled in all the right places, a sketch show featuring engaging characters and delightful situations, but which didn’t quite mesh as a cohesive whole. In Part 2, the pieces are put together, and the puzzle reveals the funniest anime in my collection. 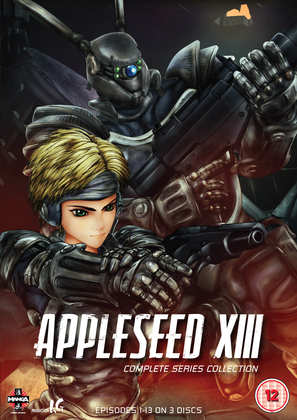 But I had to end the week with Appleseed XIII: The Complete Series on DVD, which is the biggest disappointment I’ve had with anime in many a year. It looked promising too, an Appleseed series in the vein of the CGI feature films, but the animation is inconsistent and never lives up to the standard of the films, while the story and the execution is juvenile, clichéd, and pretentious. If the show was as tenth as smart as it thought it was, it would be a Nobel prize winner. Click on the review to see just what went wrong...

Nichijou Part 2 was released on DVD earlier this year by Madman Entertainment in Australia, and indeed the only way to own it on home video is to import. Manga Entertainment release Appleseed XIII today on DVD and Blu-ray.