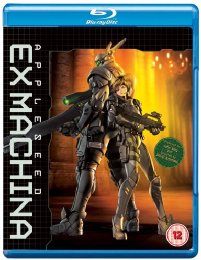 Synopsis:
Following the non-nuclear war that killed half the world's population, the city-nation of Olympus stands as a beacon of hope in a world of chaos and conflict. The utopian metropolis is governed by Gaia, a vast artificial intelligence, and administered by genetically engineered humanoids known as Bioroids, whose designer DNA suppresses strong emotions. With Bioroids being half of its population, peace and order are easily maintained. Deunan, a young female warrior, and Briareos, a veteran cyborg-soldier, are both partners and lovers. As members of E.S.W.A.T., the elite special forces serving Olympus, they are deployed whenever trouble strikes. The two fighters find their partnership tested in a new way by the arrival of a new member to their ranks - an experimental Bioroid named Tereus. Created by Gaia using DNA from Briareos, Tereus uncannily resembles Briareos before the wartime injuries that led to his becoming a cyborg. Not only does this trouble Deunan, but Briareos's DNA gives Tereus more than top-notch fighting skills; this battle-ready Bioroid is like Briareos in another way - he has also strong romantic feelings for Deunan!﻿