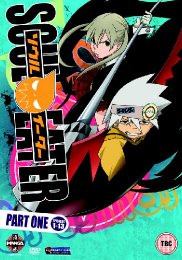 Synopsis:
Feisty teenager Maka is a Weapon Meister and Soul is her human weapon. As students at the Grim Reaper's Death Weapon Meister Academy, their study habits couldn't be more different. But in battle against the supernatural forces of evil, they're a lethal team. That's when Soul transforms - literally - into a razor-sharp scythe, and every defeated wicked soul he sucks down makes him more deadly. Their goal is to destroy and collect the souls of 99 evil humans and one witch, enabling Soul to become a Death Scythe capable of being used by an actual Shinigami. Their fellow students, who all have the same goal, include Black Star and his female partner Tsubaki, and Death the Kid, the son of the academy's headmaster Lord Death, whose weapon partners are sisters Liz and Patty. Also taking part in the soul collecting shenanigans, much to the dismay of the students, is Blair, a magical cat who is able to take on the form of the hottest young witch in town.

A super-cool, boisterous and action-packed series full of irreverent gallows humour, Soul Eater is one of the most visually and thematically appealing animes to come along in quite some time.