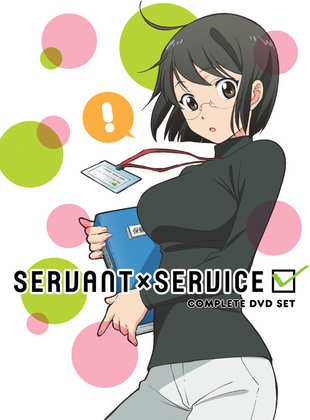 I’ve been watching a couple of complete anime series for review, which takes time. So here is a week of reviews that I prepared earlier, as I finally got some spare time to watch my Christmas anime purchases, or at least get started on them. First up was Servant x Service, a romantic comedy set in the civil service. It follows a group of three new recruits as they start work at a municipal ward office, the equivalent of a town hall, only their motives for working aren’t quite the usual. One guy just wants to take it easy in his job for life, while the show’s protagonist, Lucy Yamagami, is looking for revenge against the civil servant who approved her embarrassing name. It’s a delightfully entertaining show, with a whole lot of novelty in a rarely seen anime setting, but there is something of a missed opportunity. Click the review to see what. 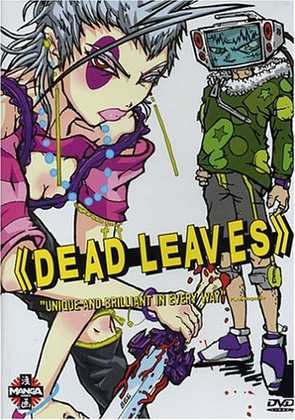 Sex, violence, profane dubs, and toilet humour. It has to be Manga Entertainment. You can’t get much more Manga Entertainment than Dead Leaves, a show that I missed out on at its initial release. It’s been an itch that I’ve wanted to scratch for over ten years now, and only recently did I get around to importing the US DVD. It’s about a couple of amnesiac reprobates that wake up naked outside a strange city. They promptly go on a crime spree, only to be caught and sentenced to the Dead Leaves prison. This show’s anarchic visuals and insane energy are just the sort of things that addicted new anime fans back in the nineties, the kind of show that initially got me hooked... But I may have let it too late to watch Dead Leaves. 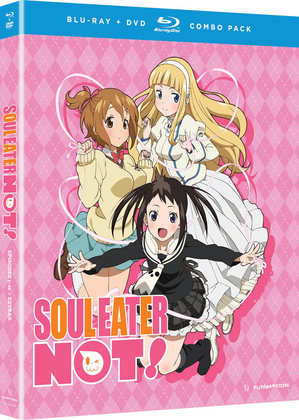 It hasn’t been long since I reviewed Manga Entertainment’s Soul Eater NOT DVDs for the site, but I love the Soul Eater franchise enough to want it in high definition. Just as I imported the Australian BDs for the Soul Eater series, I figuratively went to the US to get Soul Eater NOT on Blu-ray, and as you might guess, while the audio and visuals are clearer and sharper, the show itself is little different, looking at the non-heroes who attend the Death Weapon Meister Academy in a cute girls doing cute things, slice of life manner. 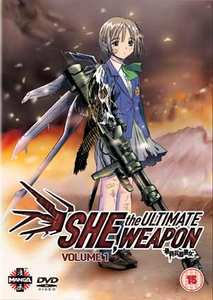 She, The Ultimate Weapon a.k.a. Saikano. Only in the mid-2000s at the height of the anime bubble could a show like Saikano have been made. It’s tragedy porn on an epic scale. If this had a Radiohead soundtrack, it would have to come with a government health warning. A boy and a girl fall in love during the final war. Girl gets ‘volunteered’ by the military to become an ultimate, cybernetic weapon, which has the tendency to put a damper on the whole romance thing, especially when tender moments are interrupted by scrambles to destroy enemy invasion fleets. And as time passes, the girl gets more and more powerful, losing touch with her humanity, until only her connection to her boyfriend is left. And everyone cries... seeming constantly, because it’s so, so tragic.

At least it is tragic if you’re of a certain, impressionable age, probably a teenager, into wearing black, and affected by the enormity of the world and those tender emotions burdening you down. Once you get a regular job and bills to pay and have to face the ‘real’ world, the manipulative nature of Saikano becomes obvious, especially the girl who doesn’t just get a death scene, she gets a whole death episode. Cherish Saikano while it can still move you to tears, as that won’t last long. She, the Ultimate Weapon was released in the UK by Manga Entertainment across three double disc volumes (back when they were releasing DTS alongside DD discs) followed by a single disc OVA release. Here’s my review of volume 1 from 2006 to get you started. This was all subsequently collected into a Complete Collection, and if you look around, you might be able to find a few volumes online, especially second hand. Viz Media originally released the show in the US, but it has since been rescued by Sentai Filmworks, although they released only the series in a 3 disc DVD collection in 2015, not the OVA. If you want to import, note that the new US release still has the series in letterbox format, with big black bars top and bottom.

Aniplex US released Servant x Service on DVD back in 2014. Manga US released Dead Leaves on DVD in 2004 (there was a UK release as well, now deleted), while Funimation released Soul Eater NOT on BD/DVD combo in 2015.