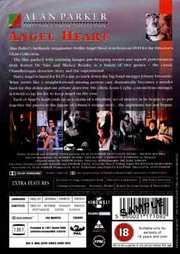 Back Cover of Angel Heart 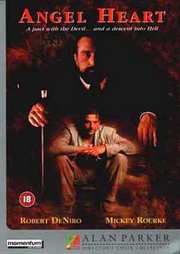 The film, packed with stunning images, jaw-dropping scenes and superb performances from Robert De Niro and Mickey Rourke, is a fusion of two genres - the classic Chandleresque detective story and the supernatural.

Harry Angel is hired for $125 a day to track down the big band swinger Johnny Favourite. What seems like a straight-forward missing person case dramatically becomes a murder hunt for this down-and-out private detective. His client, Louis Cyphe, a mysterious stranger, is forced to up his fee to keep Angel on the case.

Each of Angel`s leads ends up as a victim of a ritualistic act of murder, as he begins to put together the pieces in the jigsaw of Johnny`s strange story... the nightmare has just begun.

"Angel Heart" boasts a very strong cast, spearheaded by Mickey Rourke's riveting performance as Harry Angel quite possibly the best, most memorable of his entire career. It is fascinating to watch Rourke, an unshaven and unwashed slob, breathing life and sympathy into the role of the charismatic down-and-out private eye. His performance stands out even next to Robert DeNiro's first-class portrayal of the enigmatic Louis Cypher. The well-rounded cast is filled out by Charlotte Rampling and Lisa Bonet herself making a fine showing, especially convincing in the "bamboucher" scene, portraying a god-mounted voodoo child in trance. A large part of the movie's charm results from its breathtakingly ominous cinematography and the intricate set dressing.

"Angel Heart" is a dark, unsettling thriller that covers a ground from the dark streets of Brooklyn to the run down quarters of Harlem to the smoky jazz clubs of New Orleans to humid swamps of Louisiana… and, by implication, hellish consequences. Director Alan Parker uses these backdrops to create a disturbing atmosphere that is threatening and mesmerizing at the same time. The images he creates are so captivating and real that you can nearly feel the sweat on people's bodies as they make their way through the sticky air of New Orleans' French Quarter, can nearly smell the heavy and sweet air of the Mississippi delta, can nearly feel the chill that goes through Angel's bones each time he discovers the murder of one of his sources. Recognizing that someone is watching his every step and ensuring that his contacts won't live long enough to tell him what they know, Angel's mounting desperation becomes palpable.

It is a memorable movie that you will not forget too easily, due both to its somewhat gruesome nature, as well as its striking and scary visuals. Though it begins as little more than a simple private-eye movie, "Angel Heart" quickly descends through a supernatural abyss into occult themes that play out the movie's early promise brilliantly. Live Entertainment have done a great job transferring this movie to DVD, and have achieved something that seems nearly impossible: making even "Angel Heart" look better.
posted by Aslan on 20/12/2002 18:35