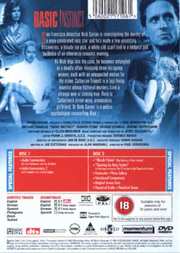 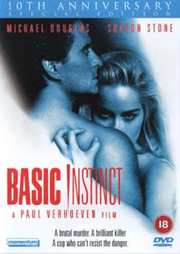 Synopsis:
San Francisco detective Nick Curran is investigating the murder of a once-celebrated rock star and he`s made a few unsettling discoveries: a bloody ice pick, a white silk scarf tied to a bedpost and evidence of an otherwise romantic evening.
As Nick digs into the case, he becomes entangled in a deadly affair involving three intriguing women, each with an unexpected motive for the crime. Catherine Tramell is a fast-living novelist whose fictional murders have a strange way of coming true. Roxy is Catherine`s street-wise, provocative girlfriend.

This caused i bit of a stir when it was released, which now seems like years ago, for the sex scenes and the infamous
Sharon Stone leg crossing scene. I remember going to the theatre to see this film and enjoyed it, but having spotted Miss Stone is `Total Recall` i was always going to enjoy this film.Its a good thriller which keeps you guessing, and with the tradmark Douglass, his usual top notch self and the stunning Stone, it keeps your attension.The picture quality is good and sharp with no problems that i noticed. The sound is also good,
not brilliant, but by no means bad, and it has a pretty good music score too, no complaints. As for the extras i quite enjoyed them! The making of covers all aspects of the film including the problems they had with the gay scene attacking the film, which prooved quite a pain in the a*** if you pardon the expression. There is also screen tests of Sharon Stone and Jeanne Tripplehorn which were quite intresting, along with some rude storyboads/comparisons,commentaries,the usual tv spots, trailors, teasers, and a funny `cleaning up the film for tv` which raised a few chuckles.
Overall a good film with good actors all round, and some decent `different` extras (quite a cool menu screen too) which is worth a purchase. Good stuff.
posted by Andy Hall on 7/7/2002 20:58