Places to Buy
Orca: The Killer Whale
Not available

Orca: The Killer Whale comes to DVD again this April 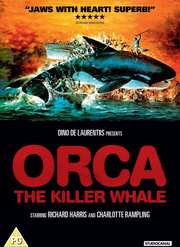 We aren't sure whether this new release has been remastered since the last one, but anyway StudioCanal have decided ten years after the last one, it's time to bring us a re-issue of Orca: The Killer Whale again on 14th April.

Based on the novel by Arthur Herzog and produced by Dino De Laurentiis, this whale based nod to a certain other famous novel and shark movie is directed by Michael Anderson and stars Richard Harris, Charlotte Rampling, Bo Derek and Will Sampson. It also features music from Ennio Morricone.

With a run-time of 88 minutes and original Dolby Mono soundtrack, the recommended retail price will be £17.99.

This charts the exploits of Captain Nolan, an Irishman living in Canada, making a living catching marine animals to pay off the mortgage on his boat and longing to make enough money to go back to Ireland. A local aquarium is seeking a killer whale; if Nolan can deliver one to them, he’ll have all the money he needs. When a school of Orcas is spotted off coast, Nolan forcibly puts a risky plan into action, but tragically harpoons his target’s pregnant mate instead.

Traumatised by the bloody murder of its partner and unborn young, and hungry for revenge, the Killer Whale assaults the boat and the fishing town in a desperate hunt for the crew. Forced by the community to stay and hunt down the whale, a guilt-ridden Nolan assembles the remnants of his crew including Annie and Umilak and enlists the support of female marine expert Dr Rachel Bedford in a voyage to meet the great beast on the seas for a climactic showdown.