New: £17.95
This sporting life ... With an introduction by the author and commentary and notes by Geoffrey Halson (The Heritage of literature series. section B. no. 98.)
Not available

This is Going to Hurt: Secret Diaries of a Junior Doctor
Picador 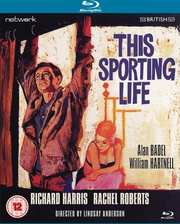 Another release from Network Distributing in their The British Film collection, out on 2nd June is the Blu-ray release of drama This Sporting Life, directed by Lindsay Anderson and starring Richard Harris, Rachel Roberts, Alan Badel and William Hartnel.

With a script by David Storey, this arrives sporting a brand new high definition transfer from original film elements in its theatrical aspect ratio.

This is unflinching look at working-class life set in the bleak landscape of Northern England. Miner Frank Machin lodges with a widow, Mrs. Hammond.

His competitive nature and powerful physique cause him to join the local rugby team and, as his career progresses, so too his brutal nature distances him from those around him. Success, and perhaps a new sense of insecurity, seems to make Frank harsher and cruder.