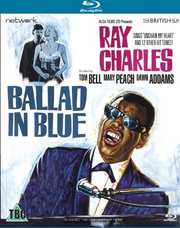 Another day, another release in The British Film collection from distributor Network Distributing. Whilst many of us remember Ray Charles' performance in classic musical comedy The Blues Brothers, he actually also put his musical talent on celluloid in a feature length movie as the main attraction.

Arriving on both Blu-ray and DVD this coming 9th June, it is presented with brand new transfers from the original film elements in its as-exhibited theatrical aspect ratio. The recommended retail price will be £14.99 and £9.99 respectively.

Extras will include an image gallery and instant play facility, which we think is marketing speak for, "it starts playing automatically whilst you are in the other room making a cup of tea.

This drama is set in mid-1960s London, where, during a performance for blind children, global star Ray Charles befriends David, a young boy who has recently lost his sight, and tries to help him come to terms with his condition.

During a world tour, Charles finds himself in Paris where a surgeon is pioneering a radical procedure, and he sets out to convince David’s over-protective mother to allow her son to undergo the surgery.