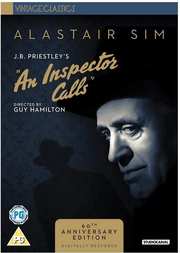 Hay guess what! Another day, another classic release from StudioCanal to bring you news of, it's almost as if we planned it. Out on 12th May is An Inspector Calls: 60th Anniversary Edition on both DVD and Blu-ray.

Based on the classic stage play by J.B. Priestley, this is directed by Guy Hamilton and stars Alastair Sim, Arthur Young and Jayne Wenham. Fully restored and remastered in 1080p, this comes in its original 1.37:1 aspect ratio with a mono soundtrack, and apparently will feature brand new extra content but quite what that is we aren't sure.

The recommended retail price will be £17.99 for the standard definition release, and £22.99 for the high def version.

The Birling family are rich, pampered and complacent. It is 1912, and the shadow of the impending war has yet to fall across their lives. As they sit down to dinner one night, celebrating the engagement of the eldest child, Sheila, to prosperous business man Gerald, a knock at the door announces the arrival of a visitor who will change their lives forever.