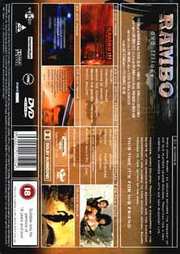 Back Cover of Rambo III 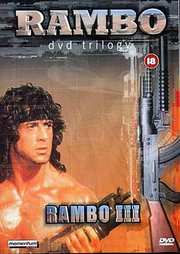 Synopsis:
Combat has taken its toll on John Rambo, but he has finally begun to find inner peace inside a monastery - until his friend and mentor Col. Sam Trautman shows up to ask for his help on a top-secret mission in Afghanistan.

A war-weary Rambo declines, but when Trautman is captured, Rambo erupts into a one-man firestorm to rescue his former commanding officer and decimate the enemy.

"John J.Rambo is back and this time he`s not to fight against the authorities of the U.S or to save the missing American prisoners of war, but he`s gotta save his best friend Colonel Sam Trautman from the hands of Russians and to help Afghans to win the war".

The story:At a Buddhist monastery in Thailand,  veteran John Rambo refuses to give up to now eluded him.  But when Colonel Trautman, the man who trained him, commanded him, been like a father to him, falls into Russian hands while out on patrol with the Afghan freedom-fighters it`s different.
Because now it`s personal, And the Russians are about to encounter a one-man counter-invasion that will leave the craggy mountains and bare rock wilderness of Afghanistan splattered with Red blood.

Rambo III is a big budget "super action hero war movie" from the year 1988 and it`s directed by Peter MacDonald who brings good new ideas to the screen. He`s known from movies like The Neverending Story 3 Escape From Fantasia, Mo` Money and the latest The Lost Empire. MacDonald was also the director of photography in First Blood Part II for those helicopter sequences. Rambo III is once again written by Sylvester Stallone with the help of Sheldon Lettich and you`ll get a pretty funny lines once again. Maybe Sly ain`t the most brilliant writer, but he really really knows how to give entertainment & good laughs to the audience.

This movie got one Razzie Award in 1988 "winner of the worst actor trophy Sylvester Stallone" and also some nominies for worst screenplay, worst director, worst supporting actor and worst picture. Well, even Rambo III didn`t get the best points from the reviewers, I still love this movie and it`s one of the greatest entertaining action movies of the 80`s. It reminds me about mixture movies like, Commando, Living Daylights, Rocky IV, Jewel Of The Nile, MacGyver (the serie) and Hot Shots 2.

The Rambo III dvd transfer is the best one of this trilogy and it looks and sounds really good. The video quality is presented in 2.35:1 widescreen just like the others, but it looks more clearer and the sharpness is almost best there can be. The colors are nice & rich and many beautiful outdoor scenes with mountains + desert look superb. Some darker scenes are sometimes a bit messy "the cave sequence", but when you`ll look enough far from your tv it looks ok. This widescreen version of Rambo III looks like a new movie and I really enjoyed it.

The audio is sadly the same as in the others Rambo`s Dolby Digital Surround 2.0, but it sounds much better than in the First Blood 1 & 2. The helicopter, tank, fighting, explotion and
shooting scenes sounded very good and "luckily" the talking scenes were clear. The strongest part comes when we hear many Jerry Goldsmith`s scores and he really gives some amazing style to the movie. Absolutely the best score of Rambo`s and one of my favourite action movie soundtracks.
Goldsmith has created new themes with beautiful sounds from many different instruments.

The extras are quite average and we`ll get a two cool trailers,
short Making Of Rambo III documentary, Behind The Scenes "scope" and "friendship" + nice photo gallery. The quality of extras of good, but there could have been more stuff. The animation of menus is once again brilliant, with Hind helicopter flying, some Goldsmith`s music and cool red colors.

For all the fans:
The best lines / my favourite lines of Rambo III:

Rambo:"What about me?"
Griggs:"What about you?"
Rambo:"Can you get me in there?"
Grigss:"Officially there`s nothing we can do."
Rambo:"Then make it unofficial."
Grigss:"You do realise, that if you get caught, etc."
Rambo:"I`m used to it"

Mujahedin: "God sure must love crazy people".
Rambo: "Why?"
Mujahedin: "Because he made so many of them!"