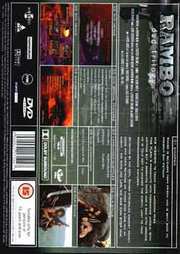 Back Cover of Rambo: First Blood 2 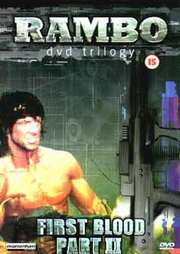 Synopsis:
Although the Vietnam War is officially over, Rambo remains the perfect fighting machine. But his survival skills are tested with a vengeance on a top secret mission that takes him back to the jungles of Vietnam in search of American POWs.

For when Rambo is double-crossed, this "expendable" hero, armed with just his bow, arrows and knife, must defeat savage enemies equipped with deadly firepower.

Rambo First Blood Part II is one of the most successful action movies of the 80`s and it grossed over 300 $ million at the boxoffice in the year 1985. Fist Blood Part II is directed by George P.Cosmatos who has worked with Stallone in the movie called Cobra, the writing is doned by Kevin Jarre (story) and screenplay by James Cameron & Sly.

Well, I really like this movie, because it`s so funny, giving nice balance during the battle scenes (mainly meaning Colonel Trautman, "This time it`s up to you", "Rambo`s the best compat vet I`ve ever seen", "Don`t try the Blood & Guts rutine, let the technology to do the most of the work", "Don`t stop to smell the roses", isn`t he funny. The character of Rambo is very cool and there`s superb musical score from Jerry Goldsmith who has managed to make awesome mixtures from the Rambo tunes. The action scenes & explotions are so entertaining, that you can watch this sequal all over and over again. Really recommended to the 80`s action fans.

So, now the dvd review.
The picture quality is quite good (anamorphic 2.35:1 widescreen, aspect ratio 16:9), but still sometimes the
sharpness is fuzzy and there`s a little amount of grain in the dark scenes, but overall the video quality is damn good, with light & bright colors. Compared to the old rental vhs, this looks beautiful.

The audio is once again the Dolby Surround 2.0, but luckily better than in the First Blood. All the action scenes are nicely clear + shootings & explotions sounds better than ever. I`m quite pleased with the audio. Many talking scenes were much clearer than in the first Rambo.

The menus are the best of this trilogy and once again better than in the Region 1 dvd. One of my favourite menus ever, even there`s not so much animation, but still excellent.
The extras are also pretty nice. Cool trailer, some documentaries, making of Rambo, Sylvester Stallone personality profile, Interviews with Sly & Crenna, Behind the scenes, photo gallery, something like that. Even it seems there`s a big amount of extras, it takes only about 40-50 mins to check them all. Unfortunately we don`t get the audio commentary as the region 1 dvd, but the luckily the extras are quite nice & interesting.

Overall this is a nice dvd transfer, great video quality, audio ok, cool menus, nice extras and great movie. So, buy it.
One more thing, many violentic scenes "actually this movie ain`t so brutal there`s just lots of killing & shooting" are restored back to this dvd release (the tv or rental vhs were cutted versions).

"3 years after his little incident John Rambo is still locked away in prison, until his old friend Colonel Trautman shows up with a deal. Rambo will be released from prison if he agree`s to return to Vietnam and search for American MIA`s. The government suspects the Vietcong of illegally holding their soldiers prisoner in peace time and they need Rambo to confirm this. Rambo accepts but once he arrives in Vietnam he finds that not only is he fighting his old enemy, but has also been betrayed by his own country."

This is the story we are given for why we are returning to the world of Vietnam Veteran John Rambo. However fans of the original should not expect the sequel to do what the first film did. Gone is insane anti hero John Rambo, and in his place is government patriot John Rambo. No longer does Rambo have to worry about the troubles of civilian life because his government is sending him home to Vietnam. Yeah right, because there are so many Vietnam vets who want to return to the war. Not really, Vietnam was a horrible place and I doubt there is really a single vet who wants to return. Still like the original if you forget the ridiculous story and enjoy it as an action movie then your in for a good time. In fact I personally think that `Rambo:First Blood part 2` is a better film than the original, because now it at least admits that it`s dumb. No more time spent on developing the character of Rambo because they now have the budget to throw large explosions at you every few seconds. This works for the film because the film now moves so fast that you can easily ignore any plot holes that are thrown at you, and after all how could anyone really focus on these points when they are watching the ultimate lads movie. Put simply you can`t, you either enjoy it for what it is or you hate it so much that you can`t watch it. It all depends on the individual.

Unfortunately even as a lads movie, `Rambo` isn`t perfect because it features some of the worst lines of dialogue in history. I think it`s safe to assume that most of you have seen this film by now, but if by some chance you haven`t then be warned that my next comment does contain an extremely small spoiler, but that line at the end when Rambo says that he can not hate his country and that all any soldier wants is for there country to love them as much as they love it. It`s just so sickeningly patriotic that even the president probably started to feel ill. Still despite the bad dialogue `Rambo:First blood part 2` is still one of the classic lads movies.


A better disk than the first film. There`s a trailer, a few more documentaries, some interviews, a personality profile on Sylvester stalone, and a photo gallery. Still no modern stuff but this time it`s actually a decent disk.


A better disk than the first film, but they could have still done so much better with the material.
posted by moviebuff on 31/10/2002 01:06