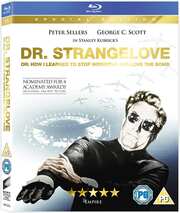 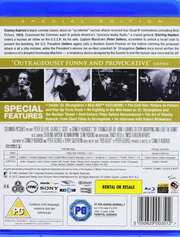 Blu-ray
Dr. Strangelove, or: How I Learned to Stop Worrying and Love the Bomb

DVD
Being There (UK)
Related Articles

This is one of those films that I really should have watched years ago, but somehow never got around to. Stanley Kubrick’s Dr. Strangelove Or: How I Learned to Stop Worrying and Love the Bomb is one those building block movies; a movie that you really need to watch as part of your film education, and I’ve always felt a little sheepish, writing all these reviews, and never having seen it; or indeed all the other ‘building block’ movies I’ve managed to miss out until now. One day, I will watch The Godfather! The problem is that I might have left it late with Dr Strangelove; it’s a satire that speaks to the heights of Cold War paranoia and nuclear brinkmanship, and we really don’t live in that world anymore. On the other hand, I am a child of the Cold War, and I’ve lived with the constant fear of nuclear Armageddon, so I should still have the sense memory that will allow me to appreciate Dr Strangelove. 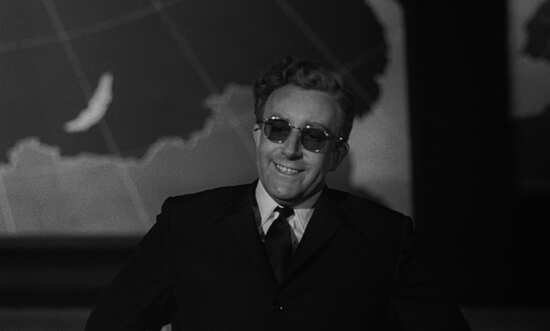 Deterrence, or mutually assured destruction is supposed to keep both of the superpowers from engaging in a final nuclear war, but such cold logic doesn’t account for the human element. Both sides are left scrambling to avert destruction when the crazed General Jack Ripper uses a plan for a worst case scenario to launch an attack on the USSR with a squadron of B52s. As the planes head to their targets, the US president and his advisors, along with the Russian ambassador gather in the War Room with a hotline to the Russian premier, hoping to find the stand down codes in time to stop the bombs being dropped. Meanwhile General Ripper is holed up in his airbase, fending off the unit sent to stop his scheme, while losing himself in his conspiracy theories. 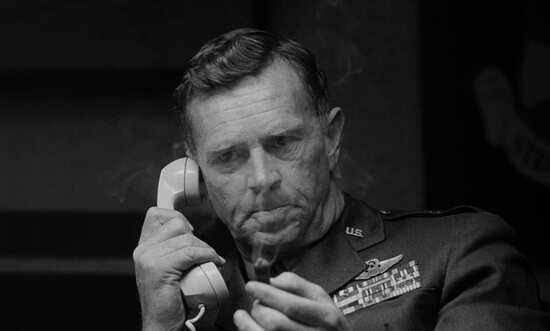 Dr Strangelove gets a 1.66:1 widescreen 1080p monochrome transfer with the choice between Dolby TrueHD 5.1 Surround English and Spanish, Dolby Digital 2.0 mono English, Dolby Digital 5.1 Surround Czech, Hungarian, and finally Polish voice over. There are subtitles in these languages and Arabic, Bulgarian, Danish, Finnish, Greek, Hebrew, Hindi, Icelandic, Norwegian, Portuguese, Slovakian, Swedish, and Turkish. The first thing that you’ll wish for is a lossless original mono track as opposed to the lossy audio we get here, and for that you’ll have to shell out for the Criterion release. The monochrome image is really quite good, detailed with rich contrast, and with no sign of print damage or age, other than maybe a slight flicker. Stylistically it is quite striking, with the arch drama of the War Room set contrasting with the documentary feel of the B52 interior and the army combat sequences. The dialogue is clear throughout, and the audio is well balanced and without issue, although the surround up-mix does get a little ‘imaginative’ at times with its ambience, and once again I do wish the original mono on this disc was lossless. 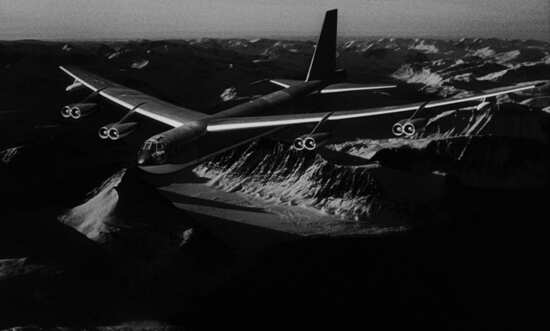 You get one disc in a BD Amaray with some nice inner sleeve art. The disc boots to a cute animated menu and there is a link to BD Live Content, if the server still exists. You get enough in the way of extras to justify the Special Edition moniker that comes with the disc, although that pales against what the Criterion release offers.

The Cold War: Picture-In-Picture and Pop Up Trivia Track is just that, pop up trivia, and talking heads for which you’ll have to adjust your secondary audio settings on your player (unless you leave it on by default). 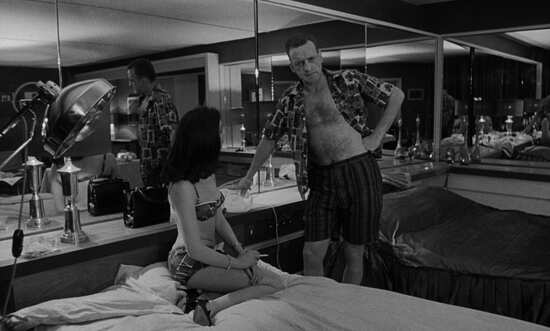 No Fighting In The War Room Or: Dr Strangelove and the Nuclear Threat lasts 30:04 and various luminaries discuss the film.

Inside: Dr Strangelove Or: How I Learned To Stop Worrying and Love The Bomb lasts 46:04 and is a retrospective making of featurette. 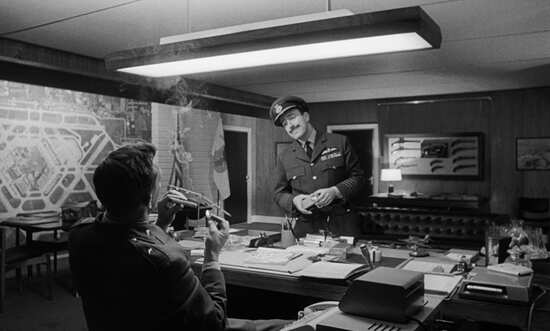 Best Sellers Or: Peter Sellers and Dr Strangelove lasts 18:27 and is a bit of a mini biography.

The Art of Stanley Kubrick: From Short Films to Strangelove is another mini-bio at 13:50.

An Interview With Robert McNamara lasts 24:26 and is a talking head piece with JFK’s Secretary of Defence. 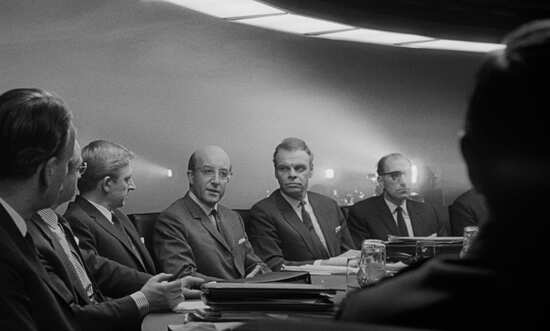 Split Screen Interview With Peter Sellers and George C. Scott is a promo piece from the period that lasts 7:17.

All of the video extras are in SD format, and it seems the interview with Robert McNamara and the Picture in Picture are not on the Criterion release. 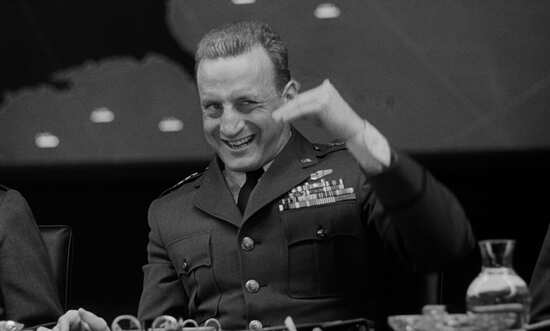 I did leave it too late to watch Dr Strangelove, although I have to admit that I’ve never really got on with Kubrick’s films; they always feel a little too clinical to me. That’s telling with this film, a satirical comedy about the prospect of nuclear war. I laughed... once and that was more of an amused exhalation than even a chuckle. I found Dr Strangelove to be intellectually funny. I recognised its wit, and appreciated its message, and of course I bow down to the comic genius that is Peter Sellers, but damn it! If you’re a comedy, then make me laugh! I can also recognise just how influential and meaningful this film is, and I was instantly reminded of two of its spiritual descendants. Tim Burton created his own War Room for Mars Attacks, and implemented it to more comic effect, while I still find Wargames to be a much better anti-nuke polemic. 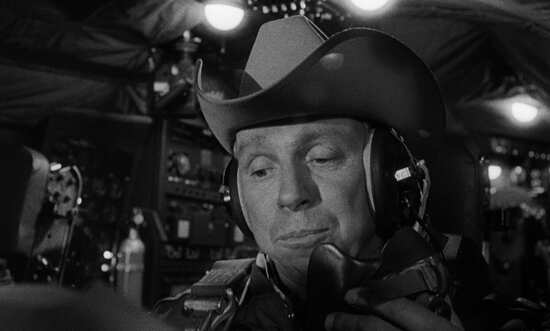 I think it’s because we’re so far on the other side of the Cold War that the sheer lunacy of the period is taken for granted. When Dr Strangelove was made, we were in the middle of nuclear brinkmanship, skirting dangerously close to the edge with confrontations between East and West all over the world, an airlift to West Berlin, the Cuban Missile Crisis, and a war about to flare up in Vietnam. Governments were actively considering deploying nuclear weapons, and generals and leaders were actively contemplating a winnable nuclear war. To deploy such lethal weapons, they created elaborate chains of command, and systems of codes, with human and automated elements that may have seemed robust and immune to abuse, but turned out to be vulnerable to rogue and unanticipated elements. 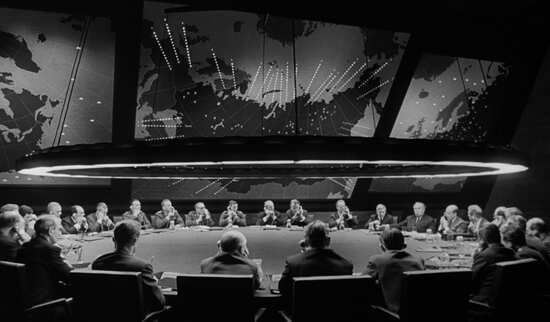 Dr Strangelove plays those absurdities and oddities up to the point of the ludicrous, with world leaders and military commanders presented as childish and petty. The crisis is sparked by one lunatic with generals’ stars on his shoulders, a man whose beliefs and fears about the Commies, and embrace of conspiracy theories will be familiar to anyone who has clicked on a Trump supporter’s social media feed. It’s all this which makes the satire work, and I probably would have found it funny, had I not seen it all before. In this world of retrospective documentaries, and all those best movie list programmes that we get on TV, it turns out that while I had not seen Dr Strangelove before, I had seen all the best bits of the film in other forms. 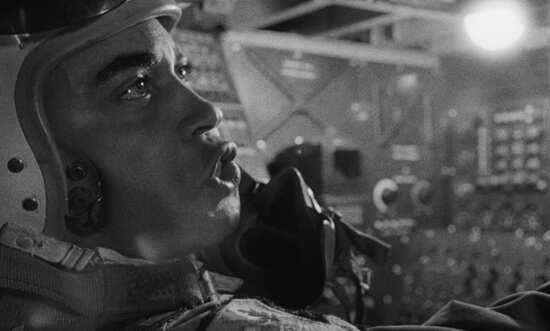 In the end the film didn’t quite work for me, and I really could only engage with it on an intellectual level. And for a film called Dr Strangelove, he’s not a character with a lot of screen time, although I do admit that he is the cherry on the figurative cake here. Dr Strangelove may have done it first, but I do feel other movies have done it better since. Still, this Sony Special Edition Blu-ray release is great if you want the film to watch with great image quality and solid audio. If you want the film to covet, and treasure on top of that, you’ll want to shell out for the Criterion edition.