DVD
After The Fox (UK) 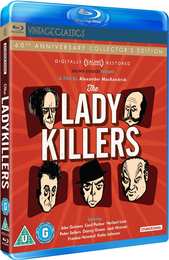 Synopsis:
The Ladykillers, director Alexander Mackendrick's third Ealing farce, is the final comedy produced by the famous British studio and one of its most celebrated. Like the equally applauded Kind Hearts And Coronets, the film is more sophisticated and blacker in tone than typically lighthearted Ealing fare (such as Mackendrick's Whiskey Galore!). Alec Guinness stars as the superbly shifty, toothily threatening Professor Marcus, the leader of a crime ring planning a heist.

Marcus rents rooms from a sweet, eccentric old lady, Mrs. Wilberforce (Katie Johnson), in her crooked London house. The professor and his co-conspirators, blowhard Major Courtney (Cecil Parker), creepily suave Louis (Herbert Lom), chubby Harry (Peter Sellers), and muscleman One-Round (Danny Green), pose as an unlikely string quartet using the rooms for rehearsal. Dodging Mrs. Wilberforce's constant interruptions, the hoods hit upon the idea to use her in the daring daylight robbery (filmed in and around London's King's Cross station). When the old girl discovers the truth, Marcus and company cannot persuade her to stay buttoned up about it and thus decide to do her in. Accompanied by a noirish cacophony of screeching trains, parrots, and little old ladies at afternoon tea, a series of unlikely events builds to the hilarious, surprising finale.