New: £7.99
Will Ferrell's Narcos
Not available 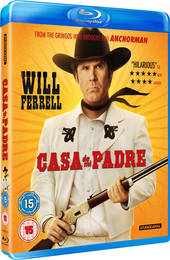 Will Ferrell in a comedy speaking Spanish? It's true we tell ye! Optimum Releasing are bringing us the Studio Canal title Casa De Mi Padre on both DVD and Blu-ray this 1st October.

Directed by Matt Piedmont, this also stars Gael García Bernal, Diego Luna and Genesis Rodriguez. With a running time of 81 and 85 minutes (depending on the version, DVD PAL is sped up by 5% don't you know!), both contain extras including a making-of featurette, interview with Pedro Armendáriz Jr., deleted scenes, music video and fake TV ads.

The DVD will come with both 5.1 Dolby Digital and Dolby Stereo soundtracks in their original Spanish with English subtitles, and a recommended retail price of £15.99. Whilst the Blu-ray will feature 5.1 DTS HD and PCM Stereo audio, and an RRP of £19.99.

Ferrell is Armando Alvarez, an earnest, gentle soul, a dreamer who has lived and worked on his father’s ranch in Mexico all his life. As the ranch encounters financial difficulties, Armando's younger brother Raul, shows up with his new fiancée, Sonia.

It seems that Raul's success as an international businessman means the ranch's troubles are over as he pledges to settle all debts his father has incurred. However when Armando falls for Sonia, and Raul's business dealings turn out to be less than legit, all hell breaks loose as they find themselves in a war with Mexico's most feared drug lord, the mighty Onza.