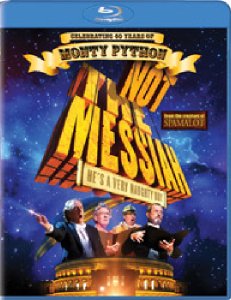 Monty Python Fans Rejoice!
The Life of Brian Gets the Musical Treatment in…

NOT THE MESSIAH
(HE'S A VERY NAUGHTY BOY)

From the Creators of Spamalot Comes the
Historic One-Night Only Live Show!

On Blu-ray™ High-Def and DVD from June 14

Feel like you have the best seat in the house when Sony Pictures Home Entertainment releases the one-time only live event Not the Messiah (He's a Very Naughty Boy) on Blu-ray Disc™ and DVD on June 14.

Not the Messiah (He's a Very Naughty Boy) delivers the magic of a historic performance by members of the Monty Python troupe celebrating their 40th Anniversary with a song oratorio inspired by the cult film The Life of Brian at London's Royal Albert Hall. The performance features a rare on-stage reunion of Pythons Eric Idle, Michael Palin, Terry Jones, and Terry Gilliam. Brand new special features include three behind-the-stage featurettes and 6 sing-a-long songs, along with BD-Live™ functionality on the Blu-ray Disc version.

The Blu-ray Disc also features movieIQ+sync™, a new and immersive BD-Live movie watching experience that uses a connected, real-time movie database. With a movieIQenabled Blu-ray Disc and an internet connected Blu-ray player, movie fans can dive into continuously updated information on cast & crew while exploring relevant trivia such as production facts, music and soundtrack information, all tied to scenes within the movie. Additionally, movieIQ+sync gives viewers the full movieIQ experience on their computer or iPhone by linking to the Blu-ray Disc.

Synopsis:
In 1979, Monty Python's Life of Brian turned the Biblical epic on its head. Now, the creators of Spamalot Eric Idle & John Du Prez turn classical music on its ear! Prepare for Not the Messiah (He's a Very Naughty Boy), the comedic masterpiece that combines all of the unforgettable humor of the Python's most celebrated film with the overblown grandeur of operatic solists, full symphony orchestra and chorus. Filmed live on October 23, 2009, the performance stars Eric Idle with special appearances by original Python troupe members, Michael Palin, Terry Jones, and Terry Gilliam.

DVD Special Features Include:
Blu-ray Disc Exclusive:
movieIQ+sync and BD-Live connect you to real-time information on the cast, music, trivia and more while watching the movie. Once connected, movieIQ+sync will display all of the great information movieIQ offers on a computer screen or iPhone instead of onscreen, all while staying synchronized to the movie! The Blu-ray Disc version of Not the Messiah (He's a Very Naughty Boy)isBD-Live enabled, allowing users to get connected and use the disc as a key to unlock exclusive content and features via an Internet-connected Blu-ray player. Download exclusive content and give feedback through our survey and more!
Not the Messiah (He's a Very Naughty Boy) has a running time of approximately 91 minutes and is rated 12.