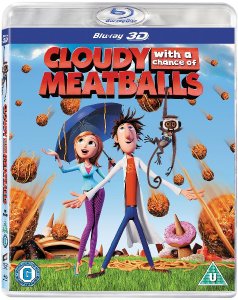 The Blu-ray 3D™ release of Cloudy With A Chance of Meatballs will showcase the film's colourful environments and groundbreaking lighting technology crafted by an award-winning animation team in full 1080p high definition 3D, optimised for the latest 3D playback devices and eyewear, as well as a 2D high definition version of the film that can be viewed on existing Blu-ray players.

The eye-popping Blu-ray 3D™ release of Cloudy With a Chance of Meatballs offers a variety of delicious special features and will also feature sneak peeks in 3D of Sony Pictures Animation's Open Season, also coming soon to Blu-ray 3D™.

"We are thrilled to announce the first Blu-ray 3D™ titles from Sony Pictures Home Entertainment," said SPHE worldwide president David Bishop. "We drove the industry in Blu-ray adoption and are now leading the way with compelling 3D content for the home. The addition of 3D showcases the versatility of Blu-ray and further demonstrates why it is being adopted by the mainstream as the home entertainment format of choice."

The animated hit, Cloudy With a Chance of Meatballs will be available on Blu-ray 3D™, bundled with select Sony Electronics 3D televisions and Blu-ray players, and will be sold separately at select retailers for an RRP of £24.99.

The Cloudy With a Chance of Meatballs Blu-ray 3D™ was mastered at Colorworks and authored at Sony Digital Authoring Center (DAC).

Cloudy With a Chance of Meatballs Synopsis:
When Flint Lockwood's (Bill Hader) latest contraption accidentally destroys the town square and rockets up into the clouds, he thinks his inventing career is over. Then, something amazing happens as delicious cheeseburgers start raining from the sky. His machine actually works! But when people greedily ask for more and more food, the machine starts to run amok, unleashing spaghetti tornadoes and giant meatballs that threaten the world! Now it's up to Flint with the help of weather girl Sam Sparks (Anna Faris) and Steve, his talking monkey assistant, to find some way to shut down the machine before the world is covered in super-sized meatballs!

Written and Directed by Phil Lord & Christopher Miller, Cloudy With a Chance of Meatballs was based on the bestselling book by Judi Barrett and illustrated by Ron Barrett. The film was produced by Pam Marsden.

Cloudy With a Chance of Meatballs has a running time of approximately 90 minutes and is rated PG for brief mild language. Artwork and 2D digital clips are available for download at www.sphepublicity.com. Visit Sony Home Entertainment on the Web at www.SonyPictures.com.uk.

Am I the only one that thinks 3D TV is utterly pointless?  Even at the cinema it seems like a gimmick (and one you have to pay extra for to boot).  I recently watched How To Train Your Dragon in 2D and it was perfectly fine - I didn't see a single frame that would have been enhanced by being in 3D.

I watched and reviewed Cloudy With a Chance of Meatballs on BD and it was great in 2D.  The very thought of sitting at home wearing special glasses seems strange.  Call me a luddite or a flat earther if you will, but I have yet to see a film that was better in 3D or I wished was given an extra dimension - and yes, that includes Avatar.
posted by David Beckett on 15/4/2010 22:27