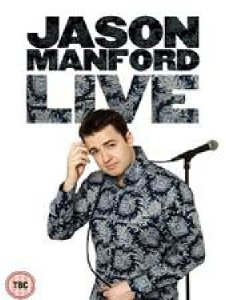 Jason Manford has been on the road with his largest tour to date performing the critically acclaimed show, 'Off On Tour We Go', to packed houses, including arenas, since June 2010. That's a long tour. His final show is on 29th November at the O2 Arena in London. By then he will have performed to over 300,000 people. If you saw the show live, re-live one of your best nights out with all the family with this DVD, and if you missed it, fear not as now's your chance to enjoy it at home.

Jason's debut DVD, Jason Manford Live at the Manchester Apollo, released in 2009, sold almost a quarter of a million copies. In this brand new must-have DVD, Jason Manford Live, Jason shares hilarious tales of being a new dad, talks about bad names for babies, embarrassing stories about his family and some of the classic malapropisms they come up with, tales from his performance at the Royal Variety Show, shower mishaps, visiting "dangerous" animals and some of the joys of life. Extra content includes: "Access All Areas" - A unique insight into what goes on behind the scenes on tour and "Jason Manford: Your Questions Answered" - Jason answers some questions from his fans.

Jason said "I am really excited about my new DVD. We filmed it at the MEN Arena, to a home crowd of 12,000 people and the audience were amazing. I hope you enjoy watching it as much as I've enjoyed performing it."

Jason has presented several TV shows, most recently include; the comedy entertainment show Comedy Rocks with Jason Manford, ITV1 (2010 & 2011), the comedy game show Odd One In, ITV1 (2011) as well as the brand new series in search for the next star stand-up comedian Show Me The Funny, ITV1 (2011). His credits also include Live at the Apollo, BBC1, The Comedy Annual, ITV1 and Michael McIntyre's Comedy Roadshow, BBC1. Currently on tour, he'll be on the road until November 2011. Jason's first book, an hilarious yet warm memoir of growing up funny in a big working class Manchester family, is released in the autumn.

'Difficult to resist.' The Guardian

'Eye for everyday detail.' The Independent

Jason Manford is a writer, comedian, actor, radio and television presenter. He was tipped to be a comedian from a very young age, but despite being a joker in his youth, Jason only got into comedy by chance. After leaving school at the age of 17, he began collecting glasses at the Buzz Comedy Club in Chorlton-cum-Hardy. One night a comedian didn't turn up, so Jason filled in. Six gigs later, he was crowned The City Life North West Comedian of the Year.

His first major television appearance was as a guest on the Channel 4 panel show, 8 out of 10 cats, hosted by Jimmy Carr. He later went on to replace Dave Spikey as Team Captain in 2007 and continued for five series.

Jason cites Billy Connolly as the first comedian he saw when he was 9 years old, and as the very first inspiration for him to become a comedian. Peter Kay helped him at the beginning of his career offering Jason advice.