Back To The Future Trilogy 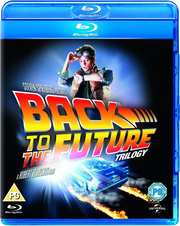 Synopsis:
Experience the time travel adventure of a lifetime with Back To The Future!

Join Marty McFly (Michael J. Fox), Doc Brown Christopher Lloyd) and a time-travelling DeLorean as they travel to the past, present and future - setting off a time-shattering chain reaction that disrupts the space-time continuum.

From filmmakers Steven Spielberg, Robert Zemeckis and Bob Gale, experience the ultimate time travel adventure. Packed with bonus features - it's time to go Back To The Future!

Back To the Future
Michael J. Fox stars as Marty McFly, a typical American teenager of the Eighties accidentally sent back to 1955 in a plutonium-powered DeLorean "time machine" invented by slightly mad scientist Christopher Lloyd. During his often hysterical, always amazing trip back in time, Marty must make certain his teenage parents-to-be, Crispin Glover and Lea Thompson, meet and fall in love - so he can get back to the future.

Back To The Future - Part 2
A visit by Marty and the Doc to the year 2015 seems to resolve a few problems with the future McFly family. When they return home, they discover someone has tampered with time and Hill Valley, 1985. They must once again get back to 1955 to save the future.....

Back To The Future - Part 3
Michael J. Fox and Christopher Lloyd star with Mary Steenburgen in this rousing conclusion to the popular series. Stranded in 1955 after a freak burst of lightning, Marty must travel back to 1885 to rescue Doc Brown from a premature end. Surviving an Indian attack and unfriendly townsfolk, Marty finds Doc Brown is the local blacksmith. But with the Doc under the spell of the charming Clara Clayton, it`s up to Marty to get them out of the Wild West and back to the future.