Back To The Future Trilogy (3 Discs) (US) 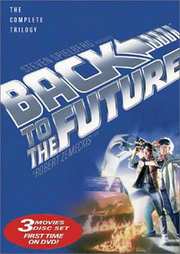 Synopsis:
Back To the Future
Michael J. Fox stars as Marty McFly, a typical American teenager of the Eighties accidentally sent back to 1955 in a plutonium-powered DeLorean "time machine" invented by slightly mad scientist Christopher Lloyd.
During his often hysterical, always amazing trip back in time, Marty must make certain his teenage parents-to-be, Crispin Glover and Lea Thompson, meet and fall in love - so he can get back to the future.

Back To The Future - Part 2
A visit by Marty and the Doc to the year 2015 seems to resolve a few problems with the future McFly family. When they return home, they discover someone has tampered with time and Hill Valley, 1985. They must once again get back to 1955 to save the future.....

Back To The Future - Part 3
Michael J. Fox and Christopher Lloyd star with Mary Steenburgen in this rousing conclusion to the popular series. Stranded in 1955 after a freak burst of lightning, Marty must travel back to 1885 to rescue Doc Brown from a premature end. Surviving an Indian attack and unfriendly townsfolk, Marty finds Doc Brown is the local blacksmith. But with the Doc under the spell of the charming Clara Clayton, it`s up to Marty to get them out of the Wild West and back to the future.

This is an excellent box set for Bttf fans. It has more extras than region 2 or 4 with the only negative aspect being it is not dts. I have however read that parts 2 and 3 on all regions have been framed wrongly. On comparing with the video it does appear that a small area of the frame is missing either side. You can try this youself by pausimg a scene and comparing both the dvd and the video versions at a particular point in the film. I have only tried it for part 2. Has anyone else heard about this?
posted by GFG on 7/2/2003 17:56
8 / 10

After much waiting, The Back to the Future has finally arrived on DVD.

There has been much anger over parts 2 & 3 being misframed for several minutes.To be honest, It`s not that big of a deal.

Each title is presented in 1.85:1 anamorphic widescreen,and except for the framing, look generally impressive. Images are usually well detailed and quite good.

Each disc comes with a plethora of extras.The first disc features: a promo featurette from 1985, and a retrospective featurette featuring Bob Gale,Bob Zemeckis,and Mike Fox.
There is an enhanced conversation with Fox, that features a pop-up window during the movie,and he talks about making the movie.There is commentary with Gale and Neil Canton that proves to be pretty interesting.A Q&A session featuring Robert & Bob is noteworthy.Another way to watch the movie is with animated anedotes that pop up during the movie.Also to check out are make-up tests ,the trailer,DVD-ROM features,production archives,outtakes,and deleted scenes with Commentary from Gale.

The Second disc features the promo featurette,as well as a new featurette.Gale and Canton provide another worthy commentary.Gale and Zemeckis also provide another Q&A session.The animated anedotes are fun to watch.There are also deleted scenes with Gale commentary,outtakes,a hoverboard test,a Huey Lewis music video,production archives,and a piece on the visual effects.Finally,Gale discusses the moviemaking process in a featurette on time travel,storyboarding,production design,and the Delorean.

DVD producer Laurent Bouzereau has done a great job with this three disc set.If you are really angered with the misframing,just buy the fullscreen set.
posted by Adam Morrison on 5/3/2003 17:11