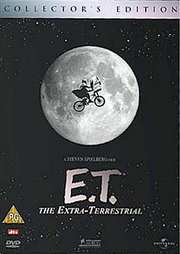 When an alien (E.T.) is inadvertently left behind on earth, he finds refuge with youngster Elliot (Henry Thomas). As Elliot and E.T. bond as friends, it soon becomes clear that E.T. must find his way home before government officials capture him for study. Together, E.T., Elliot and Elliot`s family and friends help reunite E.T. with his spaceship.

Special Features:
`E.T. - The Extra Terrestrial`: The restored, remastered and re-edited 20th anniversary edition of the film (2002)
`E.T. - The Extra Terrestrial`: The restored and remaster original edit of the film (1982)
`20 Years Later`: An intimate interview with director Steven Spielberg about the making of the film
`Isolated John Williams Live Music Score`: A live performance conducted by composer John Williams (2002)
`Space Exploration`: An interactive journey into space using 3D graphics
`The Creation And Evolution Of E.T.`: A unique behind the scenes programme featuring previously unseen footage, interview and Henry Thomas` original screen test!
`The Music Of John Williams`: Interviews and footage of the long-standing relationship between composer John Williams and director Steven Spielberg
`20th Anniversary Premiere`: An exclusive look at the preparation, rehearsal and live performance of John Williams` score at the 2002 premiere of the film
`The Reunion`: Cast and crew reunite to discuss their thoughts on the impact of the film
`E.T. Archives`: Production photographs, conceptual drawings and original advertising materials
Trailers
`A Look Back`: a documentary (40 mins) exclusive to this 3 disc release!
DVD-Rom features: Behind the scenes material, interview excerpts, premiere footage

Moving, marvelous, magnificent, majestic and those are just the "M" words I can think of to describe "E.T.: The Extra Terrestrial". "E.T." is a film set in the era of timelessness. A film so infinitely rewatchable and identifiable that people 50 years from now will still connect with it.

Spielberg is the master cinematic storyteller and "E.T." moves at a constant pace. While it never feels slow, it never feels rushed and Spielberg concentrates on characters first. Some of his best shots; the line of agents on the horizon, the bike chase and the moon are in this film. Eliot and E.T. flying against the moon is probably a contender for most famous shot ever. The cast is also great with Henry Thomas putting in one of the best performances by a child.

I have not watched the special edition nor do I plan to. "E.T." is perfect the way it is and it is not needed to be change. And I HATE CGI characters. I have listened to John Williams' live score, though.

Video: Spielberg DVDs contain nothing but the best A/V presentation of his films and this DVD is not exception. For a 1982 film (compare this to the Blade Runner DVD), this is superb. The film has obviously been restored, as there are only minor defects in the print. Nothing in this print distracts from viewing. There is a little bit of noise in the scene of Eliot's first encounter with E.T outside but this is very minor. Colours are spot on and steady, which is more than I can say for my VHS. This is a great transfer and will please the most critical fan.

Audio: Presented in both DD5.1 EX and DTS 5.1 ES. I only have DD so that's what I'm reviewing. This is a mighty fine mix. The sub is given a nice workout in the opening and closing spaceship scenes. The front stage is used mostly while the surrounds are used for ambience. John Williams' score, which I consider to be one of the best, is presented in both front and back. This is one re-mix that works and while not demo material, it is a fine presentation for the film.

Extras: This 3-Disc set is similar to the 2-Disc set but the extra disc contains the original 1982 film, "A Look Back" documentary and the original trailer.

First up on disc one (which holds the Special Edition) is a Steven Spielberg introduction. This small piece has Steve explain why he re-released it and why he changed it. Also on the disc is an alternate track, which is John Williams' Live Score for the 2002 edition. Complete with applause, this is essential for any Williams' fan.

Disc Two: "The Creation and Evolution of E.T" is a brand new, 50-minute documentary. It is largely retrospective but includes some fine on set footage. We also get to see Henry Thomas' audition and Harrison Ford's deleted scene. Though not as comprehensive as the 2-hour documentary on the Lazer Disc, this is a superb addition.

"The Reunion" is a 17-minute piece filmed at the reunion of the cast and Spielberg. They share their experience and what effect "E.T" had on them.
"The Music of John Williams", is a 10-minute piece on, the music of John Williams. Some fascinating stuff in here including Williams' playing the theme to Spielberg on the piano for the first time and them getting prepared for the live score.

"The 20th Anniversary Premiere" which delves deeper into the live score of the premiere as well as preparations.

Also included on this disc is "Space Exploration", a map of our galaxy with some information on the planets. A huge gallery of designs, photographs and marketing. And trailers round off the disc.

Disc 3: "A Look Back" documentary is a bit older than "The Creation and Evolution of E.T." or at least the Spielberg segments. The cast and crew reflect on "E.T." and its effect on them, cinema and the world. The trailer for the original film is also on this disc, but it's terrible! Totally gives away every point of the film. Bah!

The case is a double-amray case, unlike the 2-Disc, which is foldout cardboard. Included is the same 8-page booklet.

Overall: A lot of people dislike "E.T.", simply because it is a "happy" film (the ending is hardly "happy", which may explain why the world is like it is. To wit, a vulgar, violent, trivial film like "Pulp Fiction" is in the Top 20 on IMDB, while the majesty and hope defining, "E.T." is stuck in the 170's, even though "E.T." is even better cinematically. Only the truly cynical, hateful or apathetic teenagers can dislike "E.T". This 3-Disc version is the definitive DVD release of "E.T". Top-notch transfer and superb extras that cover everything you wanted to know about "E.T". BUY THIS. If you bought the 2-Disc, I recommend you get hold of your receipt exchange this and pay the extra €7. It's well worth it.
posted by directorscutIMDb on 16/2/2003 14:32
8 / 10

I still Prefer the Original, although admittedly the New Anniversary edidiotn has more in the way of visual perfection
posted by Richard73 on 25/3/2005 09:49