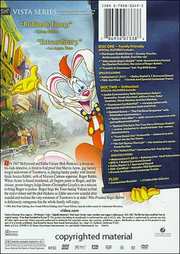 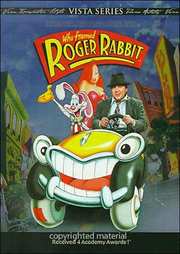 Synopsis:
It`s 1947 Hollywood and Eddie Valiant (Bob Hoskins) a down-on-his-luck detective, is hired to find proof that Marvin Acme, gag factory mogul and owner of Toontown, is playing hanky-panky with femme fatale Jessica Rabbit, wife of Maroon Cartoon superstar, Roger Rabbit. When Acme is found murdered, all fingers point to Roger, and the sinister, power-hungry Judge Doom (Christopher Lloyd) is on a mission to bring Roger to justice. Roger begs the Toon-hating Valiant to find the real evil doer and the plot thickens as Eddie uncovers scandal after scandal and realizes the very existence of Toontown is at stake! Who Framed Roger Rabbit is deliciously outrageous fun the whole family will enjoy.

This is the first 'Vista Series' set I've have bought, and I will say that I was a bit worried before it arrived because the only discs that have given my player any trouble have been Disney DVD's. However, either Disney have changed their ideas, or have had a lot of customer complaints because this set, on the box, and on the discs, has the DVD Video logo.

As good as the set is, the quantity of extras is not very large. But more extras means more compression of the film, and less quality. However, considering that the cost of a physical DVD is a lot less than the fancy packaging, why not have the film on a disc by itself, and then the extras can then take up as much space as necessary. Americans, and to a lesser degree here in the UK, viewers have been brain washed into thinking that unless the entire picture area of a tv is covered they are missing something - so the idea of watching a film in ratio; as it was mean to be watched - has never come to them. (This is why so many films are released in a widescreen and fullscreen version in the US - something I hope Never happens over here). Disney are no exception - so even their top of the range product - the Visa Series - has a full screen version of 'Roger Rabbit' on disc one, and a 1.85:1 enhanced for 16x9 television version - with a Dolby and a DTS track - on the other. I have to say the logic defeats me. What Disney are saying is that if you want a commentary, Dolby and DTS sound and 'Toontown Confidential' a feature length extra, you watch the 'widescreen' version of the film - so who do they think will watch the fullscreen version - the research I've read says that people buy DVD's for the extras, such as commentary and sound?

Anyway back to the plot

The plot of 'Who Framed Roger Rabbit' is loosely based on 'Chinatown' - with a private-eye who is down on his luck, out of money and not wanting to get involved but turning out to be the hero. Eddie Valliant (Bob Hoskins) is himself a mixture of Sam Spade and Philip Marlow (as made famous by Humphrey Bogart) - Bob Hoskins had already become well known in European Cinema in two 'Gangster Films' 'Mona Lisa' (1986) and 'The Long Good Friday' (1980).

In the Universe just next door - there is a world where cartoon characters are as real as you and me - a world where Toons make films, albeit with human directors, and are stars in their own right.

Eddie Valliant is hired by R K Maroon (Alan Tilvern), head of Maroon Studios, to follow Jessica Rabbit and to get some photos of her and her sugar daddy Marvin Acme (Stubby Kaye). Roger Rabbit, star Toon actor, is shown the photos by R K Maroon, they show Jessica and Marvin Acme playing patty-cake. Roger refuses to believe that Jessica would do this to him, and vows to do anything to make her happy (h-a-p-p-i). Marvin Acme is found killed - a safe was dropped on his head - Roger is the police suspect. When Roger turns up in Eddie's office pleading his innocence and begging Eddie to take the case - the reluctant Eddie Valiant has to find out 'Who Framed Roger Rabbit'.

Although a lot of praise goes to Richard Williams and his team of animators - he designed Roger, Jessica and most of the original toons - everyone admits that the star of the film, and the person who made it all work was Bob Hoskins. The acting skill that makes you believe that the toons are real, and that the absurd things happening on screen are real comes down to Hoskins - something that is acknowledged in the extras on the discs and in the way the supporting cast (particularly Joanna Cassidy as Eddie's girlfriend Dolores) follow his lead. Christopher Lloyd (Judge Doom) is so wonderfully over-the-top-evil that you can only wonder 'how did that gargoyle ever become a judge'.

Another reason that the characters feel real is the voice performance of Charles Fleischer as Roger, although his lines were eventually re-recorded, he was there on the set do his lines so that the humans could interact. (Charles Fleischer also provided the voices for Benny the Cab and two of the weasels).

In Roger, with his only purpose to make people happy and laugh - and the sultry Jessica, 'I'm not bad, I was just drawn that way', we have characters, with life, not two dimensional drawings.

Filmed in strong dark colours 'Roger Rabbit' has the 'film-noir' look better than most real private-eye films. (The whole point of 'film-noir' was the Black & White contrasts, something that does not suite colour). The time and effort put into the physical filming also helps explain why the film turned out so beautiful to look at, and why it has lasted so well - the interaction of animation and people is so much better than some modern CGI efforts. (In order that the process people had as near perfect film elements to work with the producers had two new VistaVsion cameras made - the use of VistaVision cameras and lenses explains the clarity and depth of focus of the finished film).

The picture quality on the DVD is magnificent - even the bits of the fullscreen version that I sampled. The rich colours and the black shadows, muted in the bar and Eddie's office, bright and garish in Toontown and the opening sequence, set the tone of the film better than I remember seeing it in the cinema. With not a blemish on the print - surely this is how all films should be presented? It will not surprise people to hear that I preferred the DTS track over the Dolby, but it you do not have DTS - or for some reason want to watch the fulscreen version of the film, then the Dolby track is perfectly ok.

Disney make a lot of their 'Vista' series so I was surprised to see that in reality, apart from the most excellent transfers of both versions of the feature and the 3 Roger Rabbit & Baby Herman shorts, there were not a huge amount of extras. The menus on both discs are specially filmed introductions, with Benny the Cab, - in the real world - conducting the tour. The original 'Who Made Roger Rabbit' featurette hosted by Charles Fleischer (on disc one) is quite funny, the other featurette (one disc two) 'Behind The Ears: The True Story of Roger Rabbit' was a bit of a disappointment. Billed as an 'exclusive in-depth behind-the-scenes documentary' it was hardly in-depth. As interesting as it was - it was quite clumsily edited, with people being cut off in mid stream, and more left untold than told about the making of the film.

There are many stories about the making 'Roger Rabbit', quite a few of which may be libellous, but why, for example - was Kathleen Turner uncredited as Jessica - why, after the teaser publicity had Walt Disney and Stephen Spielberg presents, the film was released as Touchstone Pictures and Stephen Spielberg presents - why not tell people that the contract said the Mickey & Bugs and Donald & Daffy could only appear on screen together, and they were to have an equal number of lines.

As for the other extras - The Pigs Head sequence, and why it did not work and was deleted, will be of interest to the general viewer because the sequence was included in the trailer. There were other bits deleted, which is not unusual with any film, and a couple of these are mentioned in the 'Behind the Ears' documentary. Other short extras on how some of the effect were created are also interesting.

The Commentary is one of the better feature commentaries, with some interesting and funny stories from the speakers (who, for a change, identify themselves as they go along so that you know who is speaking as you listen).
The 'Toontown Confidential' is in reality a subtitle pointing out things as you go along, and actually encouraging frame by frame examination of certain parts of the film. My only slight quibble is that the sub-editing is not very good. At various points they repeat things already said about Stephen Spielberg, Robert Zemeckis etc.
(If you watch it you can find out where the 3 'Hidden Mickeys' are).

One wonderful piece of trivia is in the end credits, someone has made a priceless spelling mistake by have the filming at Cannon Elstree, Hertz, England.

'Who Framed Roger Rabbit' was a very successful film and has been seen by a lot of people, this set will be a very welcome addition to most peoples collections.
posted by Tony Myhill on 14/4/2003 18:47
8 / 10

A wonderful mix of animation and live-action, this terrific piece of entertainment was previously released as a bare-bones disc with NO extras and non-anamorphic widescreen. After much waiting, the movie has arrived as a Double-Disc Vista Series title.

The first disc features the full-frame version of the movie and with Dolby 5.1 audio. The extras include three hilarious Roger Rabbit shorts, a kid friendly featurette hosted by Charlie Fleisher, Roger`s voice, and a set-top DVD game.

The Second disc features the movie in 1.85:1 anamorphic widescreen. An improvement over the previous release, this new transfer features rich colors, accurate fleshtones, and the overall image is terrific.

The audio is pretty decent with the added option of a DTS track, which is the preferred listening experience.There is some good surround activity and dialogue is clear.The Dolby 5.1 track is fairly good, but is slightly outdone by the DTS track.

The extras on this disc include a great audio commentary with Robert Zemeckis, Frank Marshall, Steve Starkey, Jeffrey Price, Ken Ralston, and Peter Seaman.There is great interaction between the participants and there is loads of information to be shared.

"Toontown Confidential" is feature that allows facts and trivia to be read while the movie is be watched. There is some fun trivia to found here.There is a deleted scene that features Eddie Valiant with a Pig-Head drawn on him thats complete with commentary and an introduction.There is a 36 minute documentary that proves to a pretty good watch complete with lots of interviews and making-of footage.There a really neat section that allows you to explore Valiant`s office.There are also "before & after" comparisons, on-set footage, and a featurette on toon stand ins.

Like other Vista Series titles, the packaging is pretty cool: a gateway fold out with a slipcase that features a companion booklet, two "autographed" pictures of Roger & Jessica, and a $ 5 mail-in rebate for owners of the original release.