Before we get to the Comicon News proper, here’s one news snippet that blew my mind. Fumihiko Sori, the director of Ping Pong (live action), and Vexille (not live action) is making a Full Metal Alchemist movie, and he’s apparently adapting the whole manga to just one single feature film. That’s going to take a lot of editing. This is the latest line of manga and anime to be adapted to live action in Japan, what some people, myself included see as the Hollywoodised dumbing down of the industry, and I’m certainly sceptical about this film. It doesn’t seem to me to be a franchise that sits well in the live action realm, although I hope to be proved wrong. They’ve already made one, necessary change to the story, aging up the protagonists Ed and Al. After all what works in anime won’t necessarily work in live action, and who wants to see an 11-year old get his arm and leg ripped off in an alchemical experiment gone wrong.

It’s been another Comicon weekend where all manner of genre entertainment is being celebrated, where in a small section of the Excel Centre, anime fandom meets the anime industry to hear of all the good stuff that’s coming forth in the next few months and years, and this weekend, all four major UK anime distributors were represented. You heard right, four of them, for this month saw the UK release of Seraph of the End, the first anime release from Universal Pictures UK. Contrary to expectations, a big company like Universal is just making a small, tentative splash in the UK market to see how things go, but judging by the fan response to their first release, they’ve hit the ground running. Anyway, you can read more about the goings on at Comicon at the other anime sites, Anime News Network, UK Anime Network, and Anime UK News, from where I filched the news alongside Twitter and Facebook. This is all about the new licenses!

Universal will be bringing us the new Berserk anime, and Drifters. Drifters comes from the creator of Hellsing, while Berserk is yet another CG take on the classic, and never-ending story. Both anime are yet to air in Japan, so it may take a while to get to the UK. You’ll have to be satisfied for now with Seraph of the End, and The Heroic Legend of Arslan.

Jerome Mazandarani was there with his team, wearing hats for both labels, although there were no Kazé announcements this time. Jerome also made an impact with some of his tweeting, and his panel Q&A this year, although not for all the right reasons. We’ll draw a delicate veil over that and stick to the new licenses.

In non-anime release news, Red vs. Blue will get the steelbook treatment, and Animatsu will also release the live action/CG film, Monster Hunt.

Jerome also promised a few more license announcements over the next couple of weeks, as the ink is yet to dry on a few contracts.

As has been the case for the last few Comicons, MVM didn’t have a panel, but they did unleash a torrent of tweets and Facebook posts over the weekend, revealing their new licenses and confirming some previous announcements.

The new licenses were...

Serial Experiments Lain has long demanded a Blu-ray release in this country (it’s been out for years in AU and US), but my particular retro-joy goes to the Tenchi Muyo announcement. The first two OVA series were one of my gateways into anime, and they are prime material for HD presentation (unlike the subsequent digipaint 3rd OVA series). MVM’s biggest coup was probably the Skip Beat announcement, which has only recently been kickstarted for US release. Hopefully we’ll get it on Blu-ray too.

Anime Limited are certainly flying high when it comes to licensing right now, thanks to a close relationship with Funimation. They seem to have found the right balance between their collector’s editions and their standard releases, and one bit of news that had me squee-ing, and opening my wallet this weekend was the Full Metal Alchemist Ultimate Edition details. It’s a veritable edifice of a release, jam packed full of alchemical goodness, and a far sight more promising than the live action film. It’s the original 51-episode series if you’re wondering, available for the first time on Blu-ray. It will have a RRP of £299.99 for its release in October, but until then it has a pre-order price of £149.99, and if you pre-order prior to July 5th, it will cost you £124.99. There will only be 970 available to buy, and you can bet that I’m £125 worse off this weekend, as it became available for pre-order on Friday. A cheaper Collector’s Edition will follow. And that was before they unleashed their torrent of new licenses...

This has been an exceptional year for anime licensing in the UK, and there will be something for everyone in the 36 new titles announced this weekend! 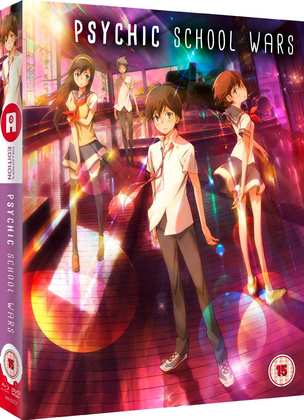 And after all that, there’s room for some reviews too. I began the week with Psychic School Wars, an oxymoron of a film if ever I’ve seen one. It’s a frightfully pretty film, and it’s frightfully dull too. The prettiness comes in the animation, which is wondrous and vivid, coloured like a dream, and with more lens flare than a Star Trek movie. The dullness lies in the story, which for all its promise of Psychic School Wars, really only delivers on the school front, more concerned with a school romance in the foreground, leaving the psychic to happen in the background, and with the wars late to the whole affair. Click on the review to read more. 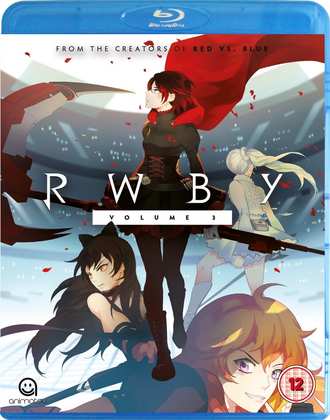 It may not be anime proper, but RWBY: Volume 3 turned out to be my best release of the week. This US animation from the Rooster Teeth studio started off in a pretty mundane way, but as its story has unfolded, it’s become more and more compelling. This third volume is what you might call the game-changer, the story developments that turn this universe upside down, puts its characters through the metaphorical wringer, and leaves you on a nail-biting cliff-hanger. It seems that Japanese audiences have taken RWBY to their hearts, as by some accounts, the Japanese Blu-ray releases are the best of the lot. Remember how anime used to be called ‘Japanimation’ in some quarters, I wonder if the Japanese call this Americanime? 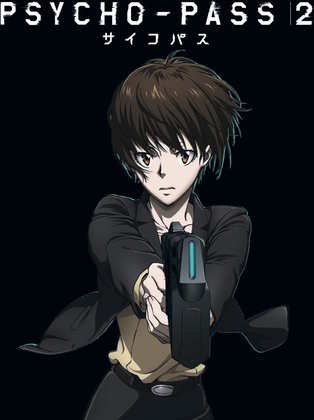 That last paragraph probably pre-empted my opinion about Psycho Pass 2. I took a look at the second season of this cyberpunk sci-fi thriller, hyped after having reviewed the first season a couple of years back. And things didn’t go quite as well as I hoped, as it turned out that Psycho Pass changes writers for its second season. It’s still the same world, mostly the same characters, but it feels, for want of a better word, more cartoonish. Click on the review to read more. 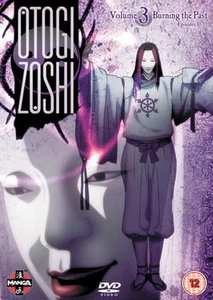 Otogi Zoshi, The Heian Arc. There was a brief time when most of the new anime in the UK came from MVM, Beez, and ADV, and Manga Entertainment was a pale shadow of its Manga Video heyday. It seemed to exist on the strength of re-issuing its old videos on DVD, and Ghost in the Shell: Stand Alone Complex, with the odd, stray new release here and there. It was around this time, ten or so years ago, that Manga’s fortunes turned around, first becoming part of Anchor Bay, then IDT, who in turn were bought out by Starz. The infusion of capital brought with it a handful of new licenses, such as Heat Guy J, Tokko, Noein, She, The Ultimate Weapon, and of course Naruto, and the rest as we say, is history; a chequered history of ups and downs, but essential UK anime history nevertheless. One of those early resurgent titles was Otogi Zoshi, an unconventional show, told in two arcs, but a show that has become one of my touchstone anime over the years.

The Heian Arc is set in a rarely touched upon period of Japanese history, at least in terms of historical anime, which usually concerns itself with the Warring States and the subsequent Edo periods. The Heian Period was close to a thousand years ago, when Onmyoji mysticism was a driving power, when court politics held sway over the land, and when the warrior classes were yet to gain their dominance in society. Otogi Zoshi’s Heian arc tells of an ailing Emperor and an ailing land, and a prophecy that says the nation will be saved when the five Magatama beads are brought together. An archer named Minamoto no Raikou is given the task of recovering the beads, along with his trusty retainer Watanabe no Tsuna, but in reality Raikou is stricken with a disease, and his younger sister Hikaru takes on the mission in disguise. It’s a fantastic story, not beholden to any of the common anime tropes, and given a singular animation style by Production IG. Here’s my review of Volume 3. Otogi Zoshi was released by Manga in 6 volumes, 3 per arc. For the first three volumes, the Heian Arc, they aped the US Media Blasters releases in terms of content and extra features, although for the first two volumes, they squeezed two discs worth of content onto one. Manga hit one of their downs when it came to the Tokyo arc, but the Heian arc does match up to the US release. Otogi Zoshi is well and truly deleted in all territories now, but stray new copies are still on e-tailer shelves, while second hand is readily available. It’s definitely a gem worth seeking out.