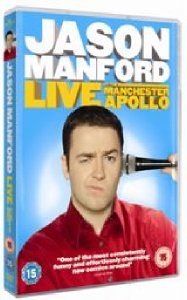 Renowned for his cheeky observational humour, story-telling and loveable, friendly delivery, this show brings together Jason's most hilarious anecdotes including the rules of driving, urinal etiquette, the power of call centre regional accents and the lies Dads tell.

As well as the critically acclaimed show, the DVD also features an exclusive extras package.

Jason's TV credits include appearing as team captain on '8 out of 10 Cats' (Channel 4) and team captain, alongside Fern Britton, on new panel show 'As Seen on TV' (BBC1), hosted by Steve Jones. Jason has also appeared on 'Live at the Apollo' (BBC1), Michael McIntyre's Comedy Roadshow (BBC 1), Secret Policeman's Ball 2008 (Channel 4) and will be hosting an episode of the forthcoming series of 'Live at the Apollo' (BBC1).

Jason's hilarious creation 'Walk on the Wild Side' (BBC1), which combines the comedy talent of Jason Manford and friends with wildlife footage, has been shown on Saturday evenings over summer 2009 and Jason Manford & Friends (BBC Radio 2) was broadcast in September 2009.

Jason is currently touring the UK with his live stand up show. Jason Manford will also be performing at the 'Royal Variety Performance' in December 2009.

"Sharp observational comedy...inspired one-liners...Manford certainly knows how to get the laughs" Metro