DVD
Billy Connolly: Journey to the Edge of the World 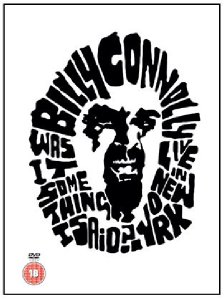 The King of Comedy and Godfather of stand-up is back.

Bringing together two of his most popular shows, Live in New York and Was It Something I Said?, this DVD release captures the comedy legend at his brilliant, inspirational, hilariously funny best.

Live in New York was filmed in NY's Town Hall in Feb 2005, and is Billy's first concert filmed in America despite the fact that toured the USA for three decades. Was It Something I Said? was filmed in Adelaide on the Australian leg of his sell out 2006 World Tour.

A legendary performer, presenter, actor, musician and comic genius, Billy Connolly is one of the most successful and popular British artists of all time. He is not afraid to tell you like it is and even though, at times, he may get criticised for his language and subject matter, he has undoubtedly brought more pleasure and laughter to more people than any other living person.

The Billy Connolly Ultimate Box Set, showcases the King doing what he does best - making us laugh. This DVD extravaganza contains 6 hilarious Live shows and all 5 of Billy's epic journey's around the world.

'The king of British stand-up' Guardian

'One of the enduring wonders of the comedy world' The Telegraph