Article
Suddenly Last Winter out on DVD in June 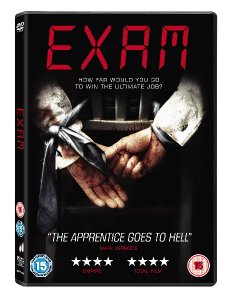 How far would you go to win the ultimate job?

Bonus Materials include Interviews, Commentary, Behind the Scenes footage and a Photo Gallery.

Coming to Blu-ray™ and DVD on June 7

A group of strangers embark on the most testing - and maybe final - job interview of their lives in Exam on Blu-ray™ and DVD from June 7, courtesy of Sony Pictures Home Entertainment. Nominated for Outstanding Debut at this year's BAFTAs, Exam is the acclaimed first feature from Writer/Director Stuart Hazeldine.

The bonus features include a commentary with the director and editor, behind the scenes footage, interviews and more. Exam will be available on Blu-ray for £22.99 RRP and on DVD for £15.99 RRP.

Synopsis:
Eight candidates face the interview from hell. Led into a windowless concrete bunker they are given eighty minutes to answer one simple question. A question that will take each candidate to the very edge…and beyond, as they are forced to confront their deepest, darkest, most violent fears. This nerve shredding thrill ride features a cast that includes Colin Salmon (AvP, Die Another Day ), Jimi Mistry (2012, RocknRolla), and Luke Mably (28 Days Later). Do you have what it takes to sit the EXAM?

DVD and Blu-ray Bonus Features Include:
Exam has a running time of 97 minutes and is rated 15. Visit Sony Home Entertainment on the Web at www.SonyPictures.com.