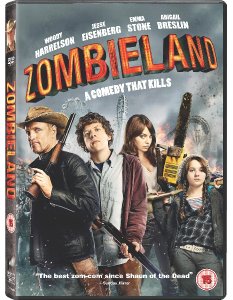 "The Best Zom-Com Since Shaun of the Dead"
Daily Mirror

And now a warning from Sony Pictures Home Entertainment: on March 15th 2010, this land officially becomes ZOMBIELAND as the number one grossing zombie movie in history takes over the nation on Blu-ray™ and DVD. Woody Harrelson (2012, Natural Born Killers), Jesse Eisenberg (Adventureland, The Village), Emma Stone (The House Bunny, Superbad) and Abigail Breslin (Little Miss Sunshine, Signs) star in this action-packed horror comedy about an unlikely band of heroes who team up to survive in a world overrun by ravenous zombies! Speaking of ravenous, ZOMBIELAND features enough outrageous laughs and terrifying thrills to satisfy the most hungry horror and comedy fans. Plus, the Blu-ray and DVD discs come loaded with killer bonus features fans will devour, including deleted scenes; commentary with Woody Harrelson and Jesse Eisenberg, Director Ruben Fleischer and Writers Rhett Reese and Paul Wernick; the making-of featurettes "In Search of Zombieland," and "Zombieland is Your Land;" visual effects progression scenes; trailers and more!

Bonus features exclusive to the Blu-ray Disc include the "Beyond the Graveyard" Picture-in-Picture Track - featuring behind-the-scenes footage, storyboards, animatics and more - and movieIQ, which allows viewers to immediately access continuously updated information on the cast & crew and explore relevant trivia such as production facts and soundtrack information all tied to scenes within the movie via BD-Live™.

Don't miss the horror comedy hit that's had moviegoers screaming with laugher when ZOMBIELAND becomes available to own on Blu-ray for £22.99 and DVD for £15.99.

Synopsis
Nerdy college student Columbus (Jesse Eisenberg) has survived the plague that has turned mankind into flesh-devouring zombies because he's scared of just about everything. Gun-toting, Twinkie-loving Tallahassee (Woody Harrelson) has no fears. Together, they are about to stare down their most horrifying challenge yet: each other's company. Emma Stone and Abigail Breslin co-star in this double-hitting, head-smashing comedy. Get ready to "nut up or shut up!"

ZOMBIELAND was directed by Ruben Fleischer from a script by Rhett Reese and Paul Wernick (Tarzan 2, Cruel Intentions 3) and produced by Gavin Polone (Secret Window, Panic Room). It co-stars Amber Heard (The Stepfather, Pineapple Express). It was distributed by Columbia Pictures and has a run time of approximately eighty-eight minutes. It has been rated 15 for horror violence/gore and language.

Also, Only on Blu-ray High Def