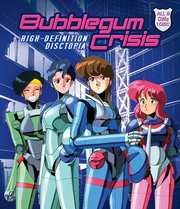 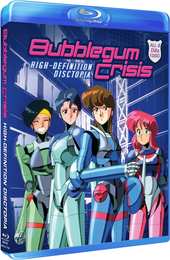 Crowdfunding can be an infuriating experience for backers when retail is the ultimate goal. You have to wait for ages, you pledge for your chosen tier, stretch goals and the like, and you ultimately you get your dream product, only for it to be on retail barely a couple of weeks later, and for a discounted price. Admittedly, I’ve taken advantage of this on more than one occasion, picking up bargain products that began life as Kickstarters. 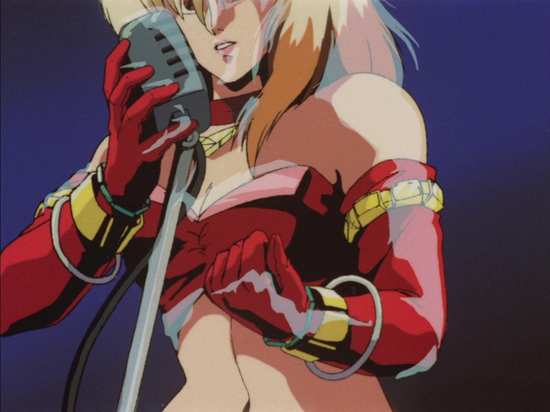 One crowdfunding project that I would have taken advantage of was Bubblegum Crisis, but back in 2014, I neither trusted, nor knew how Paypal worked, which was the only way to pledge for the set. I regret it know, as AnimEigo who released it, were determined not to diminish the experience for the backers. The eight episodes of the OVA were presented across three, dual layer Blu-rays with uncompressed stereo audio for maximum bitrate. You got the music videos, and three concert programmes as well as oodles of physical content with the sets. I settled for the eventual retail release, expecting that surely they wouldn’t go to the expense re-authoring the Blu-rays, and sticking three discs in a simple BD Amaray would be cheaper than starting again from scratch. 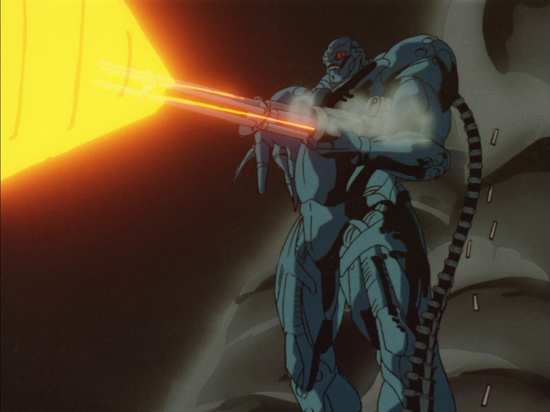 AnimEigo really do respect their backers. Not only did they wait four years between the Kickstarter sets being shipped and the retail version finally being released, but they also crammed all 8 OVAs onto a single dual-layer BD, indeed re-authoring from scratch rather than reusing existing assets. So now, I have a disc to watch that has been significantly compromised. I wish I’d trusted Paypal back in 2014. Still, this High Definition Disctopia release has the benefit of being cheap. 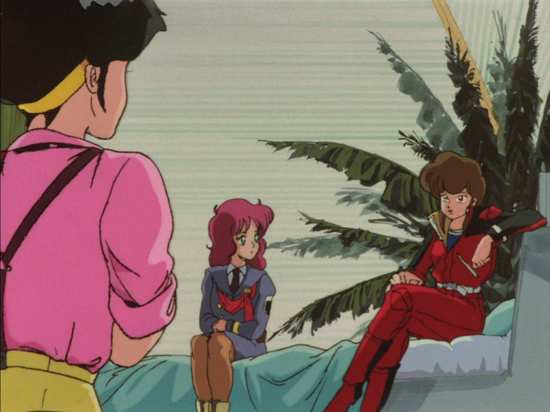 When Ridley Scott produced his influential flop Blade Runner, Japanese animation was quick to embrace ‘cyberpunk’, and one of the early series produced still remains highly popular, despite only running to eight episodes. Bubblegum Crisis from 1987 is similarly set in a dystopian future city, where machines work side by side with humans. So-called Boomers are indistinguishable from people, although on occasion a Boomer will go rogue, wreaking havoc and creating mayhem, requiring the attention of the heroic Knight Sabers. Four young girls, Priss, Sylia, Nene and Linna have access to form-fitting battle-suits and an array of cutting edge weaponry. They can defeat the toughest of opponents where even the military are outclassed. 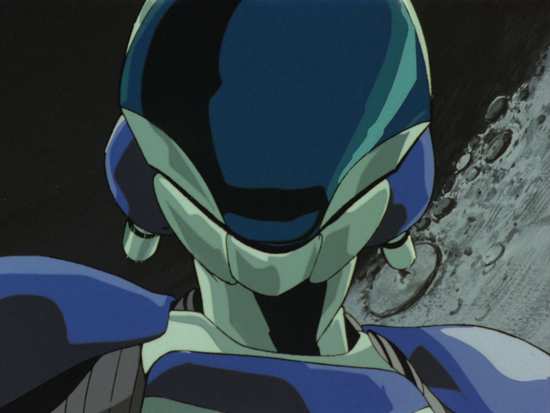 All eight episodes of the Bubblegum Crisis OVA are presented on one disc from AnimEigo. 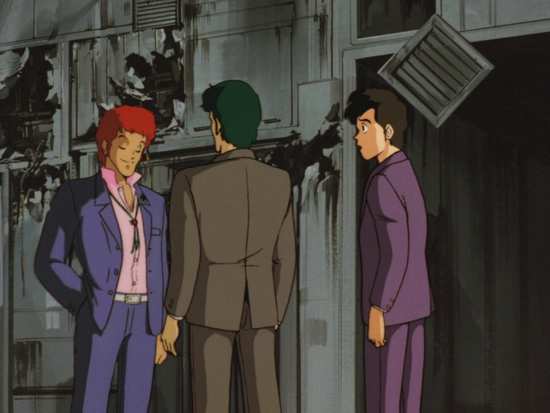 Bubblegum Crisis gets a 4:3 pillarboxed transfer on this dual layer Blu-ray. I certainly had my doubts about the image going in, as there is more than five hours of HD content on this disc, including the videos playing over the main menu. What was initially on three dual layer discs is now squeezed onto one, and you’d expect something to give. Now if there is more compression, DNR, and general finessing to get the animation to fit, I really can’t tell, certainly not without the original Kickstarter release to compare with. But I can see no problems at all with the transfer on this disc. Certainly nothing as crass as compression, aliasing or digital banding, and there is even the grain that you’d expect to see with a film source, if dialled back a bit. 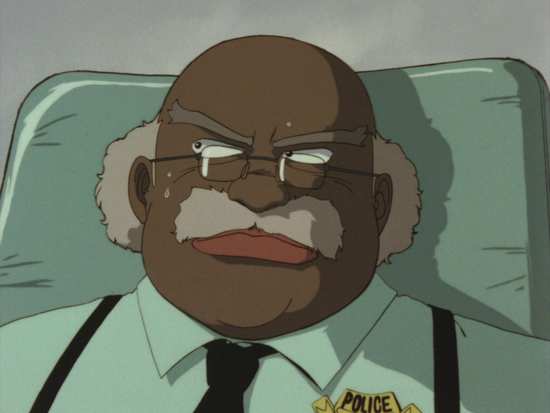 Film is the whole reason to want Bubblegum Crisis on Blu-ray. From the late eighties this was a show that was animated traditionally, with cel and paint, photographed frame by frame on a film camera. Technically, this show could even be improved by a 4k transfer, but in reality, the limits imposed by the quality of the film stock are trumped by the quality of the animation, and even though it’s an OVA, Bubblegum Crisis can’t match theatrical animation of the period such as Akira or Wings of Honneamise. But the clarity and definition, the richness of the colours, and the level of detail, even in darker scenes makes the whole thing worthwhile. This is a cyberpunk show that leans heavily on Blade Runner for its aesthetic, while the mecha designs are truly original. 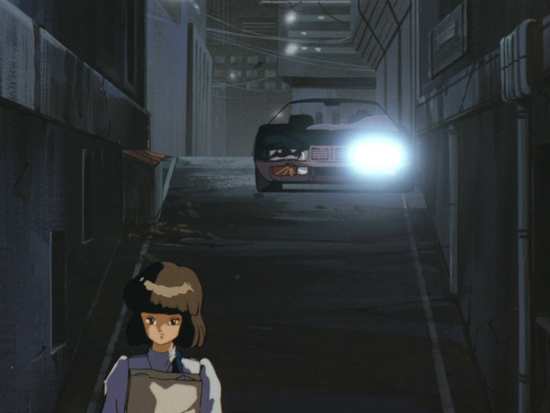 You have the choice between DD 2.0 Stereo English and Japanese, with optional English, French, Italian, Finnish, German, and Japanese subtitles. You can have the latter in coloured or greyscale form for each subtitle language. I still believe it would have been easier to simply run off the kickstarter discs and stick them in an Amaray, but then again I would have loved uncompressed audio with this title. Having said all of that, the Dolby Digital audio is no slouch, presenting at 0.3 MB/s according to my player. My choice was for the original language track with subtitles, and I was happy enough with it, the action coming across well, the dialogue clear, and the music sounding brilliant. Bubblegum Crisis is a show where the eighties pop music plays a massive part, and hearing the songs in this quality was certainly a step up over the DVDs, even given the lossy format. It’s also a show where the songs were re-recorded in English for the dub, but I prefer the Japanese. The subtitles were timed accurately and were free of typos. 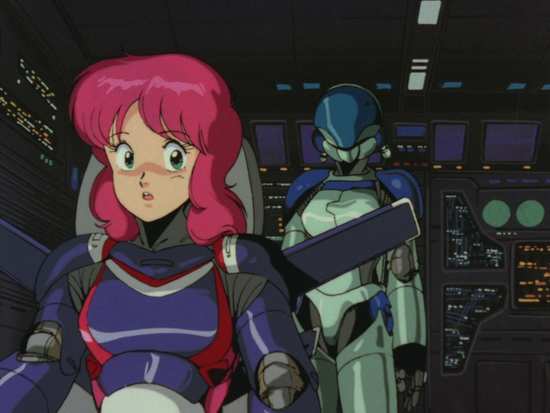 You get one disc in a thin BD Amaray case.

The disc presents its content with an animated menu. And here’s the Easter Egg. The animated menu is a 35-minute collection of several of the Bubblegum Crisis music videos which play in the 4:3 space between the menu bars. The song lyrics are subtitled, and you can even skip forward through the songs.

Listed as extras are the 5:22 Color Artwork and 16:23 Line Artwork slideshow galleries. 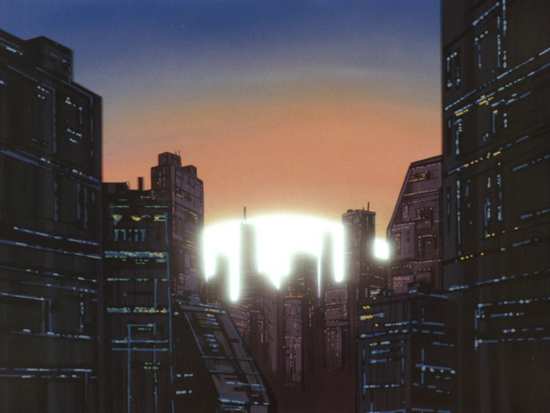 I’ve had more than a few re-watches of Bubblegum Crisis over the years, and while my initial impression of the show on DVD may have been lukewarm, I’ve grown to appreciate its cyberpunk brilliance and have developed a fond place in my heart for it. When you consider that this was a show from the nineteen-eighties, and it still remains just as entertaining and as relevant today, you begin to realise that it is just as timeless as the film that so inspired it, Blade Runner. Watching the show on Blu-ray for the first time made me fall in love with it all over again, the crisp, re-mastered visuals finally giving the anime the cinematic look that it deserves, compared to the VHS quality visuals that the old DVD masters had. Double-dipping on this show is practically compulsory if you’re a fan, especially given how reasonably priced the Blu-ray from Animeigo is. 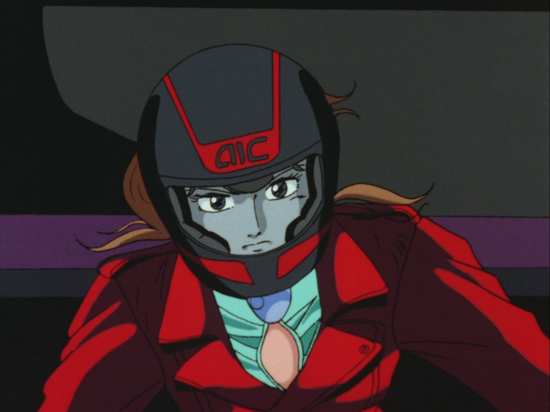 I still find the opening couple of episodes of the series to be the weakest of the bunch, not least because of the shorter running time for Born to Kill and Blow Up, but it’s much more apparent in this complete series collection that the show is really of a piece, that the Knight Sabers’ battle against the Boomers and the Genom Corporation that creates them is an overarching story across the series. Events in those first few episodes resonate down through the narrative, and the character arcs for Priss, Sylia, Nene, and Linna, as well as Leon are much better defined when you watch the series as a whole. 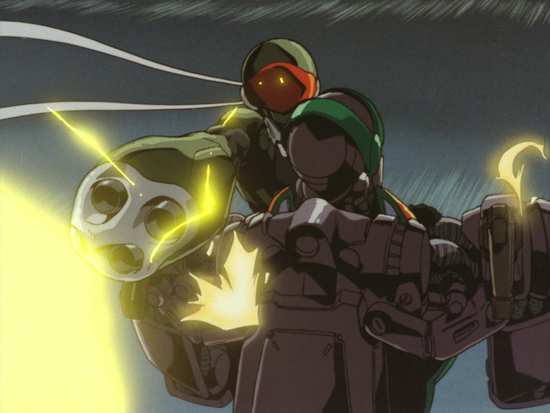 It is a classic cyberpunk story, a world where machines created to serve man, threaten mankind when they glitch, or are programmed maliciously. It’s such an issue that there is a special police task force, the A.D. Police created to deal with them. But when the A.D. Police fail, there are the Knight Sabers, women with extremely powerful and capable powered-suits able to defeat most Boomer menaces. They are also free-lance, some might say mercenaries, selling their skills to whoever can afford them, although their price limit is determined by their consciences. 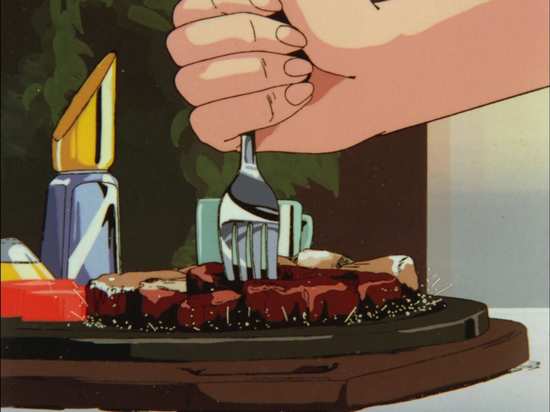 Being hired by the military to recover stolen property at the start of the story might be straying close to their moral red lines, but that initial mission brings them into conflict with Genom, whose technology is involved, and it kicks into motion the series. There are elements within Genom that are in it for themselves, not least Brian J Mason, who is the antagonist over the first three episodes, but the management at Genom is just as wretched and greedy. It’s more OCP than Tyrell Corporation in that regard. I think the weakness in that opening arc is in the conclusion. This is a high stakes game, with dangerous technology and some evil schemes at hand, but the episode Blow Up sees Mason’s downfall engineered by something as petty as gentrification, BGC’s equivalent of the Delta City plot in Robocop. 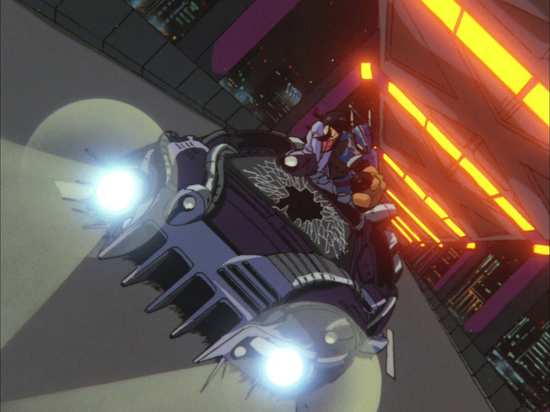 After the opening trilogy though, Bubblegum Crisis just gets better and better. You have that Mad Max style, car technology gone wrong in Revenge Road, you have the closest homage to Blade Runner in the Moonlight Rambler and the Red Eyes follow up, with escaped Boomers from an orbiting satellite giving the Knight Sabers tougher problems to solve when they turn out to be more human than human. Double Vision is a follow up to the story in Born to Kill than makes its short run time less of an issue than it is in Blow Up, and the series ends on something of a light-hearted note with Scoop Chase, as a wannabe reporter starts investigating the Knight Sabers. 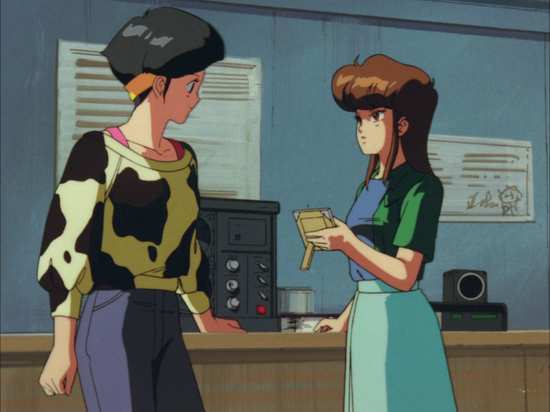 If you want more of my opinion regarding the episodes, I go into more detail in my DVD reviews, but suffice it to say that Bubblegum Crisis has aged spectacularly well, much better than most other anime shows of the era, and is justifiably a timeless classic. And I have to say that it was always meant to be seen on Blu-ray. It looks spectacularly good in high definition, and even without the uncompressed audio, AnimEigo have done a stellar job of getting all this video content onto just one disc.