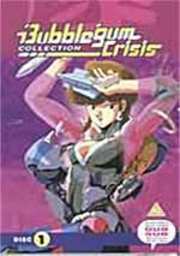 Synopsis:
MegaTokyo 2032 AD: like the mythical Phoenix, MegaTokyo rises from the ashes of a devastating earthquake. In the twisted canyons of the megalopolis the Knight Sabres, a small band of high-tech mercenaries, fight a lonely battle against the evil GENOM corporation and its sinister android `Boomers`.

Episodes 1-3: `Bubblegum Crisis`, `Born To Kill` and `Blow Up`.
The Knight Sabres are hired by the USSD to recover the `black box`, a device which can remotely control their particle beam satellites. However, Quincy, the chairman of GENOM, and his devious assistant Mason have other ideas. When the Knight Sabres thwart Mason`s plan, he makes it his personal mission to have them eliminated, culminating in an all-out battle atop the GENOM tower...