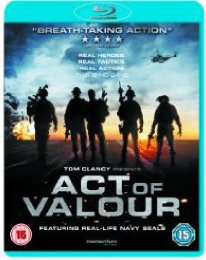 There have been plenty of war films over the decades and differing styles.  The more modern style, pioneered by the Aisan cinema industry, is big explosions and sfx – a genre I love by the way.  The directors of this film decided to do something a little different – they eschewed the use of actors and used real-life Navy SEALs as the core of their film, Act of Valor (it’s Valour actually, what is it with Americans not being able to spell in English?  Well, someone has on the UK artwork...).

Undercover CIA agent Lisa Morales (Rosalynn Sanchez) is keeping an eye on Russian smuggler Christo (Alex Veadov) and has found a link to Islamic fundamentalist Abu Shabal (Jason Cottle), but unsure of what they have planned.  Unfortunately for her, she’s already under suspicion and the arrival of her colleague Ross (Nester Serrano) leads to a swift bullet in the head for the latter and the former being badly beaten, unceremoniously rolled in her own carpet and then being beaten again as well as having a hands-on demonstration of the value of Black and Decker drills.

This kidnapping doesn’t go unnoticed, however, drawing the attention of the United States Navy and their SEAL teams.  Led by Lt Mike and Chief Dave, the SEALs are called in to rescue Morales and then sent on a pan-global hunt for Shabal in an attempt to first work out what he’s up to and then to stop him dead in his tracks when it becomes clear that he means to strike at the heart of the United States.

The picture is superb with a variety of close action, overhead and aerial shots looking rather spectacular.  Colours are vivid in daylight and solidly black during night shots, no surprise as this was filmed in high definition.   Some neat tricks, including a carpet roll at the beginning that made me feel slightly nauseous.
Extras

Director’s Intro – the main feature can be played with or without this extra, which is essentially just reminding everyone that it’s real Navy SEALs in play here rather than actors.

Deleted Scenes – mostly interesting but not required, although one with the main terrorist demonstrating how tapped and fundamentalist he is was rather superb.

Interviews with active duty Navy SEALs – the main bulk of the extras is right here with interviews with all the main characters that are both somewhat banal and also fascinating at the same time.

The rest of the extras are rather brief, no more than five minutes apiece and there is some repetition:

This film has come in for a fair bit of stick since release for essentially two things: some feel it’s little more than a propaganda film for the US military and that the acting is poor.    The first point is a fair one, but quite frankly, so what?  Film fans and critics have been making this argument for ever, even dismissing most of the spectacular ID4 on the basis of one speech – missing the point that most Americans wear their hearts on their sleeves as far as patriotism goes.  It can seem a little cloying at times but it works for them in the same way it does for most other nations, even the more reserved English – look at us now basking in patriotic pride now the London 2012 Olympics are in full swing.

As for the acting?  Well, casting real-life special forces personnel in a film means you’re not going to get Oscar-winning performances, but overall it’s not that bad – it’s just like a bunch of gruffer Keanu Reeves in uniform with big guns.  There’s very little plot dialogue anyway, essentially revolving around the relationship between Lt Mike and Chief Dave and Mike’s impending baby as the setup for the inevitable ending in Arlington.  Besides, there are plenty of real actors about to fill in the gaps. And quite frankly the SEALs really don’t need another Charlie Sheen.

It’s the action where this film truly excels.  The military co-operated heavily with the filmmakers and it shows with the breadth of hardware on show as well as real tactics and live ammo – some of the scenes were actually filmed on a live firing range, leading to some very dramatic scenes, the best one involving fast moving boats and  mini-guns  - one of the extras shows the effect this gun has on an ordinary pickup truck, there are more holes that the average Swiss cheese.

The plot, such as it is, is essentially an amalgam of real-life events from previous SEAL missions woven together.  To be honest, though, I don’t think an awful lot of it was scripted – I suspect the filmmakers told their SEALs what they were looking for and were advised where to set up their cameras and the SEALs just did the rest, ultimately being filmed going through the motions.  And quite impressive motions they are too.  Even the ongoing chatter, rather than dialogue, is extremely realistic with acronyms and jargon being thrown out constantly with no thought to explain the meaning to the viewer.  Nice touch.

I loved this film and found it comparable to recent French film Special Forces, which was probably a little better acting wise, and also Battle: Los Angeles.  Despite its flaws, which in my mind are minor compared to the whole, this is a well structured and action packed film with a level of realism that will be hard to beat.