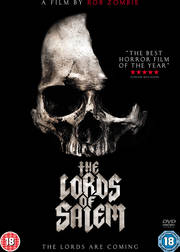 Not sure how we missed this, usually we are quite obsessive about horror news, but anyway here it is now. Momentum Pictures released Rob Zombie's latest horror flick The Lords of Salem on 22nd April.

Out on DVD and download, the recommended price for this will be around £12.99.

A former drug user, Heidi is now clean and works as a rock DJ at the local radio station along with fellow DJs, Herman Whitey Salvador and Herman Jackson. Following one of their regular evening shows, Heidi receives a square wooden box containing a vinyl record, the only indication as to its origin is a note proclaiming “A gift from the Lords”.

Assuming it is merely a PR stunt by an ambitious band, Heidi gives the record a spin and immediately begins to experience bizarre flashbacks to a past, long-forgotten trauma triggered by the haunting sounds contained on the record.