Review of They Live
added by
Anil Khedun

Review of They Live
added by
Si Wooldridge
Places to Buy

Screenshot from They Live
Related Items 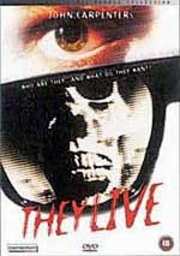 Who are they? And what do they want?
Certificate: 18
Running Time: 90 mins
Retail Price: £15.99
Release Date:
Content Type: Movie

Synopsis:
It is the near future and society is falling apart. Jahn Nada is a struggling labourer who drifts into town and makes a deadly discovery - society has been invaded by aliens from another dimension who are controlling the Earth through mind control.

Armed only with a submachine gun and a pair of special sunglasses, can Nada infiltrate the aliens` transmitting station and reveal their true forms?

Director of Photography:
Gary B. Kibbe

An enjoyable John Carpenter film from 1988, They Live is actually similar to The Matrix. Both films deal with a man who finds out that the world he lives is not what he thinks it is. However, while The Matrix deals with a virtual reality world against the real world, They Live deals with aliens who have taken over earth and control the population with subliminal messaging in advertisements, magazines, TV and even money. These include messages like "Obey","Marry And Reproduce","Consume" etc.

The picture quality is excellent for a low budget film with few flaws. The sound is also good although a 5.1 mix would have been nice.

Extras include a 8 minute featurette and audio commentary from John Carpenter and Roddy Piper. The featurette is actually fairly interesting and has particular emphasis on the film`s main fight sequence. There is also a easter egg on this disc. On the special features menu, highlight the alien`s eyes and you`ll find some additional interviews with Carpenter, Piper and actress Meg Foster. The audio commentary is informative and entertaining to listen to. Its obvious that the two participants are good friends and had lots of fun making this film.

As They Live opens we meet unemployed drifter John Nada, who is travelling around the US looking for what little work there is. Nada eventually finds himself in L.A., where he manages to get casual work on a construction site. It is here that he befriends Frank (Keith David, who starred in Carpenter`s The Thing), who offers to show Nada to a place where he can get a hot meal and a shower.

Frank takes John to a camp for the homeless, where people are cramped together in makeshift shacks, struggling to survive on what little they have. As the evening draws in, Nada notices some strange goings on at the community church across the street. The following day he decides to investigate, and inside the church he discovers a secret meeting between some of the homeless people of the camp, a crude laboratory packed, of all things, with boxes of sunglasses, and rudimentary transmitter.

That night the camp is attacked by swarms of armed police, who disperse the residents, beating many of them to within an inch of their lives. Nada escapes the purge, and the following day returns to the abandoned church to investigate. While inside he takes a pair of the sunglasses he had seen the previous day and, thinking nothing of it, puts them on before he steps outside. This is when John Nada's world starts to fall apart. The glasses alter his vision in such a way that allows him to see the world as it really it. Posters, magazines, signs, and even money all carry hidden, subliminal messages, and aliens are living among the people of Earth!

It seems that only John can see the aliens, who turn decidedly nasty after they discover that their cover has been blown. After a few cool one-liners, a messy incident with a shotgun and a kidnapping, Nada finds himself on the run with no one to turn to but Frank. After convincing Frank of the alien menace, both he and Nada join up with the underground resistance to try and shut down the alien invasion once and for all. Do they succeed? Watch the movie!

In addition to some great action and witty dialogue, They Live also just happens to feature on of the best fight scenes ever! When trying to convince Frank to wear the special glasses, John has a real fight on his hands, and the pair kick the living hell out of each other for what seems like an eternity. Just when you think the fighting has stopped, off it goes again, and this is not some stylised, over-choreographed Hollywood fight scene, it's a real street brawl! The fight has even been parodied on South Park, in the episode 'Cripple Fight'. Watch it after the scene in They Live and you'll find that they're incredibly similar (minus Timmy of course).

Momentum continues to impress by delivering yet another excellent transfer of a relatively old, low budget movie; one that rivals many newer discs in terms of image quality. The 2.35:1 anamorphic video is nothing short of superb, with strong, bold colours and nice deep blacks. The image is also surprisingly sharp and contains very little in the way of defects. This is another great effort, especially when you consider that many other distributors don't offer restored transfers of older films at all. One thing that I did notice however is that for the first three minutes of the film the aspect ratio is wider than the claimed 2.35:1. Not a huge deal, but if nothing else it shows I`m awake!

Like the majority of the discs in the Horror Collection, They Live is presented in Dolby 2.0 Stereo. While not offering much in the way of mind blowing aural effects, it is a solid track that does the film justice. The dialogue is always clear, and John Carpenter's tremendous score sounds as good as ever (although to be honest, I'd only heard it once prior to receiving the disc). I particularly enjoyed the music that accompanied John Nada's first appearances on screen, and indeed, it becomes his theme throughout the movie. The music has a melancholic tone to it, as if to drive home just how indifferent the human race has become under the rule of the aliens. At least that's my interpretation of it anyway, but then music is a subjective thing and I'm sure many would disagree.

Without doubt, the outstanding supplemental feature is the commentary track from director Carpenter and star Roddy Piper. While the banter isn't quite up to the standard of the Carpenter/Russell collaborations, both John and Roddy seem to be having a good time as they recount many stories about the production. Roddy sounds genuinely thankful to John for the opportunity to be part of the film, and Mr. Piper certainly makes for interesting listening as he tells tales of his many scrapes both in and out of the wrestling ring.

A short featurette is also included that, in addition to showing some behind the scenes action, features interviews with the cast and crew. Unfortunately this featurette is too short to be of any real interest after the first viewing, but an easy to find easter egg allows you to expand the interviews contained in the documentary somewhat and also to view a hidden photo.

They Live may be a slow starter, but by the time the action really kicks in you'll be hooked. I found the premise of the film very interesting, and 'Rowdy' Roddy Piper makes a credible leading man, especially ten years on when his exploits as a WWF star are no longer at the forefront of people's minds. He is ably backed by a good supporting cast, with Keith David being particularly noteworthy. On a personal note, watching this film has cleared up the years old mystery of the origin of a sample I heard long ago on an album by the rapper Paris. But enough of my ramblings... They Live is a cracking film, which offers a great deal more entertainment than any number of films with much larger budgets. On the negative side the extras could have been more substantial and a remixed 5.1 soundtrack would have been nice, but this is just nitpicking. They Live is a great film on a good disc and I urge you to check it out.
posted by Chris Gould on 20/12/2002 23:53
8 / 10

This is a great and enjoyable film from John Carpenter. Roddy Piper (Yes the wrestler) is John Nada, a normal man who uncovers a group of people claiming that the world has been taken by Aliens, John is given a pair of sunglasses and when he puts them on, he can see who is an Alien and who isn`t so Nada deciedes it`s Alien ass kicking time and goes to stop them, by destroying a transmiter people all over will be able to see who they really are. Keith David (The Thing) is brought in as Nada`s unwilling partner, the film it`s self features one of the longest fist fights in film, and it`s great to watch. Meg Foster also stars. The film also features some great twists, especially the end, it`s great!.

Only 2.0 which is a great shame, though it isn`t that bad and does the job, again this is a film that deserves better like a 5.1
mix or even a DTS mix on the disc.

Quite good, occasionally has a few problems, but it holds up well.

Barely any thing. John Carpenter records another Commentary (He loves DVD) with star Roddy Piper, it`s great with plenty of informative info about the production of the film.
The making of feature is rubbish, it`s a shame Momemtum couldn`t include more extras wise, what about a Retrospective documentary? Come on Momentum stop treating us like crap.
Mind you the Americans only get a trailer so we should count our selves lucky.
posted by the_film_king on 10/8/2003 14:23
9 / 10

Carpenter`s last Really fun film, It rest on a great Idea, that Aliens have infiltrated society and are keeping order by Subliminal advertising and TV test signals. It has the funniest and one of the longest fist fight scenes in history, great fun, It peters out towards the end, but not before providing excellent visual entertainment ala Carpenter.
posted by Richard73 on 1/12/2003 18:45