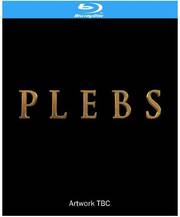 For many years ITV was the poor relation to the BBC when it came to period drama, and then suddenly Downton Abbey appeared and changed all that. Now it looks like they are hoping to do the same with comedy, so often the preserve of BBC and Channel 4.

Turning up on 29th April courtesy of Universal Home Entertainment is a brand new comedy airing on ITV2, Plebs, arriving on both Blu-ray and DVD.

Extras will include a behind the scenes featurette, The Ultimate Pleb Test, The Look of Plebs featurette and outtakes, whilst the recommended retail price will be £19.99 for the DVD and £24.99 for the Blu-ray.

The series follows three desperate young men from the suburbs as they try to get laid, hold down jobs and climb the social ladder in the big city, a city that just happens to be Ancient Rome.

Marcus and Stylax are accompanied by their lazy slave with an attitude problem, Grumio, and think a slap up meal starts with a trip to the compost heap. The boys’ ruthless boss is Flavia, an expert manipulator with a private life that's the stuff of legend.

Providing the glamour factor are Cynthia and Metella, who are new in town from Britain and pretty fit. No wonder the unlikely lads dub them the Fitons as they pursue them.