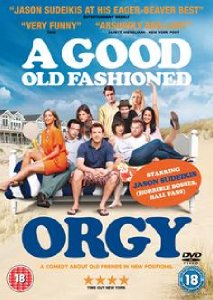 A COMEDY ABOUT OLD FRIENDS IN NEW POSITIONS

Written and directed by the duo Alex Gregory and Peter Huyck, this stars Jason Sudeikis from Hall Pass, Don Johnson of Miami Vice fame, Tyler Labine who was in Rise of the Planet of the Apes and Leslie Bibb from Iron Man 2. It also features Lucy Punch, Lake Bell, Will Forte, Lindsay Sloane and Martin Starr.

The only obstacles to overcome are actually convincing each of his reluctant friends to join in on the bacchanal, and an inconveniently blossoming romance with the real estate agent played by Leslie Bibb (Talladega Nights: The Ballad Of Ricky Bobby, Iron Man 2) threatening to sell the house out from under him before the main event can even take place.

The feature runs for 91 minutes, comes with an 18 certificate so expect at least rude words and a flash of flesh, whilst extras will include a making-of featurette and a couple of trailers.

The retail price for the DVD will be £15.99, and here are the barcodes, etc, because we know how much you people love those: