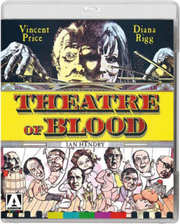 Synopsis:
It's never been tougher to be a critic than in Theatre of Blood, one of the greatest horror comedies of all time. Vincent Price gives a career best performance as Edward Lionhart, a veteran Shakespearean actor who, when passed over for the coveted Critic's Circle award for Best Actor takes deadly revenge on the critics who snubbed him.

With one of the greatest ensemble casts ever assembled for a horror film including Diana Rigg, Harry Andrews, Jack Hawkins and Arthur Lowe, Theatre of Blood is a dementedly funny and deliciously macabre cult classic.