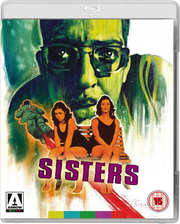 Synopsis:
Before 1973, Brian De Palma was impossible to pigeonhole: he made comedies, political satires and openly experimental pieces. But with Sisters (originally released as Blood Sisters in the UK) he turned to the suspense thriller and discovered his natural home – and a style that would lead directly to later masterpieces like Carrie, Dressed to Kill and Blow Out.
When Danielle (Margot Kidder) meets potential boyfriend Philip (Lisle Wilson) after appearing on the TV show Peeping Toms (a nod to the Michael Powell shocker), she invites him home, only to attract the ire of her twin sister Dominique. From across the courtyard, Rear Window-style, reporter Grace (Jennifer Salt) witnesses Philip being murdered by one of the twins – but the police find no body or any physical evidence. Naturally, Grace takes things into her own hands, and discovers more about the sisters’ relationship than she bargained for…

Strongly influenced by Alfred Hitchcock and Roman Polanski, and with a score by the great Bernard Herrmann (Citizen Kane, Psycho), Sisters was the first true “Brian De Palma” film.