The Strange Case of Dr. Jekyll and Miss Osbourne 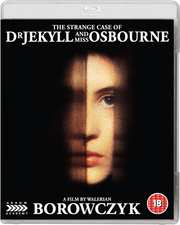 Synopsis:
Following unanimous critical acclaim for their 2014 Walerian Borowczyk retrospective collection, Arrow Video is thrilled to announce the world premiere Blu-ray release of Borowczyk’s The Strange Case of Dr Jekyll and Miss Osbourne, released on dual-format Blu-ray and DVD from 18th May 2015, marking the first time the film has been made available commercially since the VHS and Laserdisc era.

Often regarded as Borowczyk’s last great film, and his only out-and-out horror film, The Strange Case of Dr Jekyll and Miss Osbourne features his most culty cast including Udo Kier, Patrick Magee and Howard Vernon. The disc will be presented with both the French and English versions of the film, the latter featuring Patrick Magee’s own voice.

Written By:
Walerian Borowczyk
based on book by Robert Louis Stevenson