DVD
We Are The Night

V/H/S comes to cinema, DVD and Blu-ray in January 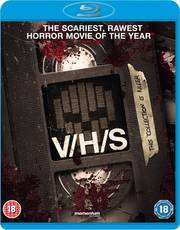 So, take a bunch of current day horror directors, let them make a shorter than usual flick, mash them all together as one big movie, what do you get? V/H/S which comes to the big screen on 18th January, and then to DVD and Blu-ray ten days later on 28th January.

Courtesy of Momentum Pictures, extras will include a trailer, alternate ending, behind the scenes footage, interviews with Helen Rogers and Simon Barrett interview,  and outtakes. The RRP will be £15.99 for both the SD and HD releases, yes you read that right, the same price! We're shocked too.

A small group of misfit friends and petty crooks are hired by a mysterious man to break into a derelict suburban house with the sole purpose of finding and stealing a rare videotape. Their only clue to identifying the tape in question is, “You’ll know it when you see it.”

However, on arrival at the house they soon realize the job isn’t as straightforward as they imagined. In one room they discover the lifeless body of a middle-aged man sitting in an armchair, facing a wall of television sets and a stack of VHS cassettes. A similar bounty of tapes is found in the basement, none of which bears any obvious markings to suggest it is the prize they are seeking. As they search through the tapes, playing them in turn, they are treated to a succession of graphic and apparently genuine video recordings, each one more shocking and bizarre than the last.