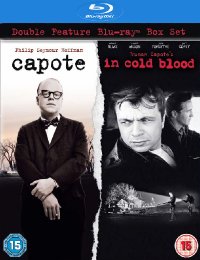 Truman Capote was one of the great American writers of the 20th Century with an ability to write superb short stories, novels and screenplays. When he learned of a quadruple homicide in rural Kansas, his journalistic instincts told him something special was afoot and he travelled to the small town of Holcomb to write a piece about the murders for the New Yorker. The material soon piled up and the only way to properly cover the town's reaction, manhunt, trial and execution of the two men was through a book - a nonfiction novel as Capote termed it - and the result was In Cold Blood, a book that made him the most famous writer in America and, arguably, the World. 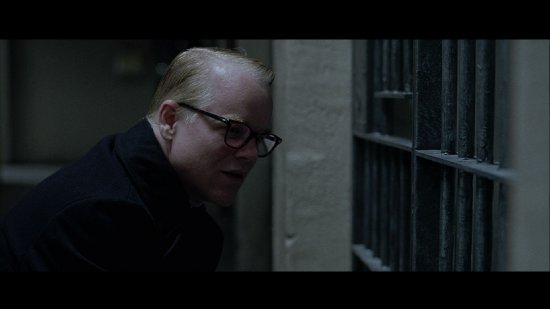 There have been three films to date made of the murders and the torturous process that led to Capote's magnum opus: In Cold Blood (1967), Capote (2005) and Infamous (2006).  This set includes the first two designed to work as a companion pieces to one another as In Cold Blood concentrates more on the legal process and doesn't feature Capote, though a journalist does make recurring appearances, with Capote entirely focused on the writer and his journey through the six year period from the murder to the executions of Perry Smith and Dick Hickock.

Written, produced and directed by Richard Brooks, this capitalised on the enormous success of Capote's novel by being made and released in just over a year after the book's publication.  It begins with Perry Smith and Dick Hickcock meeting up following Smith's release, on parole, from prison.  The opening cross cuts between the two men and the farmhouse in Kansas, with a series of cuts and sound bridges, ensuring they are inextricably linked in the audiences mind way before Dick and Hickcock even meet.

When the two ex-cons join forces at a bus station, Hickcock tells Smith that a man he did time with used to work on the Clutter's farm in rural Holcomb, Kansas and that it regularly brought in $10,000 a week.  They decide to rob the house and force Mr. Clutter to open the safe and hand over the cash.  As hardened criminals, they prepare meticulously buying rope, gloves, a shotgun and study maps of the area and house plans so they are well equipped to carry out the robbery in the dark. 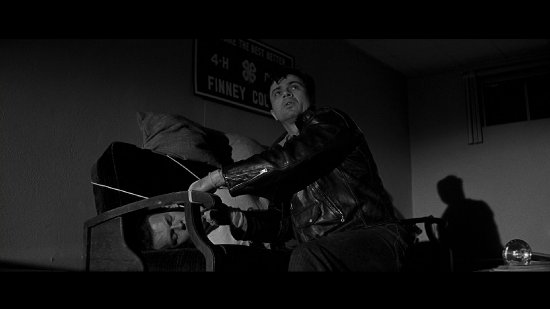 However, they don't know that Mr. Clutter is almost averse to cash and pays for everything - even a two dollar haircut - by cheque so the house is virtually cash free.  The result is a bloodbath with the four Clutters being shot in the head and Mr. Clutter also having his throat cut.

After subsequently fleeing Kansas, the two men go on a spree writing bad cheques and even holing up in Mexico for a time.  Meanwhile, the Law is on their tails and they are eventually picked up in Las Vegas for fraud and breach of parole, as one of Smith's conditions was not to enter Kansas.  During the interrogation, the attention slowly moves to the murders at Holcomb and, under massive pressure, Hickcock tries to avoid the death penalty by confessing that they were there but that Smith killed the family.

I'd never seen this film before, but was familiar with the source material, and Richard Brooks did a magnificent job with the screen adaptation and direction.  The editing is quite sublime and really helps to build up the tension.   The two lead performances, by Robert Blake and Scott Wilson are excellent and the supporting cast are all very good.  Although it is not entirely faithful to Capote's book, In Cold Blood is a terrific thriller that is well worth watching even if you're not familiar with the case or book. 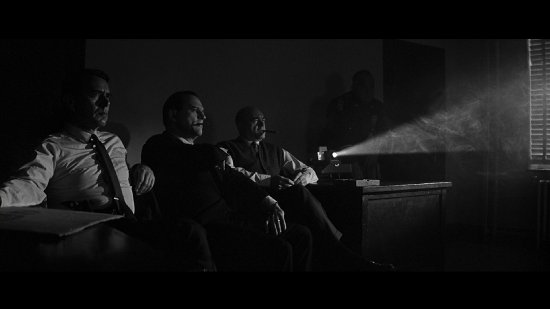 The Picture
The High Definition transfer really showcases Conrad Hall's superb cinematography and his use of stark monochrome, with the bright lights and dark shadows all creating visual motifs in a classy use of chiaroscuro photography.  The picture has fantastic contrast scenes so the blacks are deep and inky, contrasting with the vivid bright lights.

Blake even managed to film on some of the real locations, including the jail and even the Clutter house and this helps to lend the film a level of authenticity that would be missing from something shot entirely in the studio.

The Sound
One of the major features of the film is the score, with Quincy Jones composing a moody, jazz-infused piece of music that beautifully sets the tone and emphasises the tragedy in the story.  It is wonderfully presented by the front-loaded Dolby TrueHD 5.1 track that handles the dialogue very well. 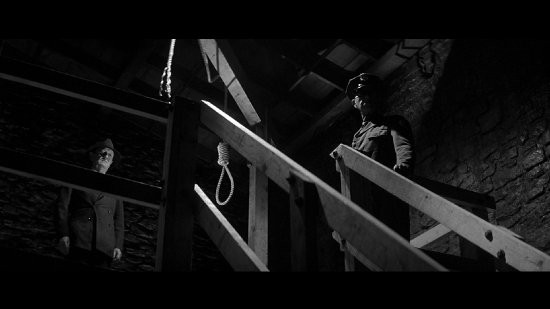 Final Thoughts
It is a shame that this disc has no extra features as I'm sure there are film historians who would be happy to talk about the movie in either a retrospective or commentary.  That said, this is a gripping thriller that is a great cinematic achievement and is all the more impressive that the tension is maintained throughout even though you know the ending.

There is an invisible character in Capote's book - the author. Capote clearly plays a massive part in events, manipulating the two murderers and digging in the small town to get to the root of what happened on the night of November 15th 1959. Tom Futterman's script, based on Gerald Clarke's biography of the writer, gives a dramatised account of the research and writing process that must have taken place.

From finding out about the murders in the New York Times to arriving in Holcomb with his childhood friend Nelle Harper Lee, through building a relationship with the killers, Smith in particular, writing In Cold Blood was a five and a half year ordeal of lies, ingratiation and self-destruction.

The film is deliberately paced, allowing you to take in all details as events unravel, culminating in a pyrrhic victory, walking a tightrope of deception to get his book written, which he knows could be great, but when it was finished, so was he. The epigraph for his last, unfinished work reads: "More tears are shed over answered prayers than unanswered ones." 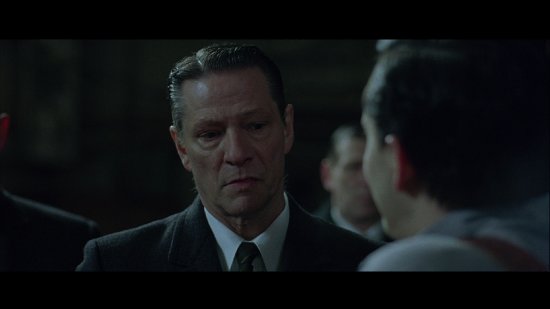 Truman Capote was such a strange individual with a distinctive voice that there is a fine line in portraying him between capturing the essence of the man and pastiche and Philip Seymour Hoffman is superb in the role. Although the voice isn't spot on and Hoffman is a great deal bigger than the diminutive writer he perfectly embodied his subject even down to slight mannerisms and stance. In her Oscar winning role, Catherine Keener acts against type to play Harper Lee and her scenes with Hoffman are acting gold. The supporting cast are fantastic with memorable performances by Chris Cooper as KBI chief Alvin Dewey, Bruce Greenwood as Capote's boyfriend and Clifton Collins Jr. who plays Perry Smith.

Capote is a wonderfully realised film with extremely patient direction by Bennett Miller who has created something very special that makes you approach In Cold Blood in a different way afterwards. 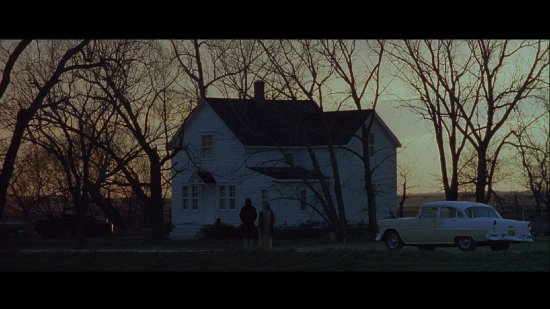 Extra Features
There are two commentaries with Bennett Miller, in one he is joined by Philip Seymour Hoffman and in the other by director of photography Adam Kimmel. The two commentaries complement each other very well, the first concentrating on the acting and the second more on the technical side - they were supposed to be joined by Dan Futterman but his wife gave birth just hours before the recording session!

The Answered Prayers featurette and two-part Making Of provide plenty of information about the shoot with contributions from the cast and crew and people who knew Capote.  There is also a trailer. 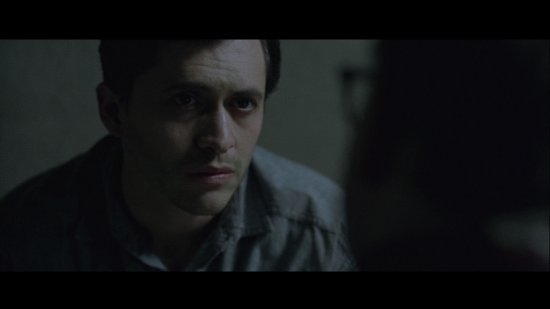 The Picture
For a film that uses so many close-up shots, the choice to shoot in anamorphic 2.35:1 may seem a little strange but the widescreen format pays dividends in the slow dolly shots where the camera imperceptibly closes in on the character and particularly in the jail scenes where, by showing three walls, the cell appears smaller than of the walls weren't shown.

Given the huge geographical gap, it's amazing how much Manitoba looks like rural Kansas with massive wheat fields and the sheer expanse of the place. The palette is very muted with no strong colours, dominated by browns, greens, blacks and yellows, perfectly suiting the tone and pace.

The HD picture is, for the most part, flawless with the only negative aspect being slight shimmering on some early pick-up shots of the landscape. The colours are beautifully presented, giving the picture the stark look that the filmmakers intended.

The Sound
The Dolby TrueHD 5.1 track provides extremely clear dialogue, essential for this kind of drama. The score works with the cinematography and editing, helping to set the tone and pace. It is a subtle piece that unobtrusively tweaks the emotion. 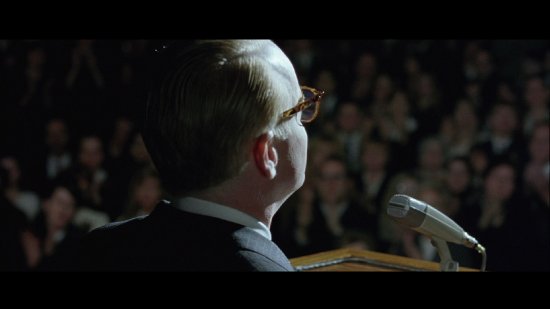 Final Thoughts
Capote was one of the better films of 2005 and it was no surprise that Philip Seymour Hoffman walked away with an Oscar for his career-best performance. It is a film that stands up to repeated viewing and you appreciate it more each time.