It’s been a couple of weeks since my last column, mainly down to a paucity of reviews, or rather the distraction of the Olympics. But while the world was striving to be faster, higher, stronger, and braver, the nation’s anime fans still managed to gather at Amecon, which is where Kazé Entertainment had a couple of announcements to make...

The UK will be seeing Mawaru Penguindrum on DVD soon, although since no US company has announced it yet, it’s dub/sub status is yet to be decided.

Kazé also announced that they are resurrecting Code Geass from the BEEZ crypt, and this time it will get the Blu-ray treatment. This show had only a brief exposure in the UK before BEEZ shut down, so a lot of fans will be welcoming its return. Kazé have already released the Blu-ray in Europe, and will have to add English materials for a UK release. (Remember that one episode has a mandatory edit courtesy of the BBFC.)

To that end, they’ve also announced that going forward, they’ll be looking to acquire UK release rights alongside the European rights when they license shows, as many fans have been asking after certain European only shows. Whether such a policy will put them in deeper competition with MVM, and indeed their UK distribution partner Manga Entertainment is yet to be seen.

You can read more at UK Anime Network.

Today, MVM made a pre-announcement on Facebook, informing us that they have a new anime license all sewn up, and will be revealed with the debut of their latest product catalogue. Let the guessing games commence, and you can rule out Shangri-La. 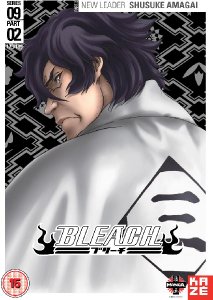 The first review for you this week turns out to be Bleach Series 9 part 2. There ought to be more anime reviews around this time, but the Olympics are on. So expect the next few anime reviews to turn up a little later than scheduled. Besides, there are times when I feel the urge to take a break from anime, to recharge the old batteries. It’s releases like the latest Bleach that push me over the edge. Kazé Entertainment have taken over the Bleach duties from Manga Entertainment and it’s all change for the release format. It’s a change that I’m not too impressed with, which you’ll see when you click on the review. That’s a shame as the story, filler though it is, is the most entertaining Bleach has been in the last few seasons. 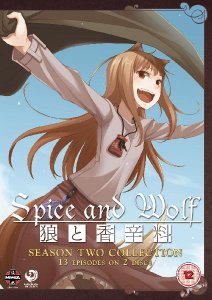 Next up was a show with no such issues. I took a look at Spice and Wolf: Season 2 and this was one time that I am overjoyed to report that it delivers more of the same. It offers more of the same slow, sedate storytelling, the same focus on pseudo-mediaeval economics, and best of all, more of the same delightful characterisations as before. It’s really a show about the relationship that develops between two very appealing characters, and is a refreshingly adult and measured take on romance. I loved the first season, and surprisingly, I found even more to appreciate about the second. Click on the review to read more.

The Manga logo is still prominent on Bleach Series 9 Part 2, as they are the ones getting it to the shops on behalf of Kazé. It came out last Monday, as did Spice and Wolf: Season 2, also from Manga Entertainment.