Scooby Doo! Mystery Incorporated: Volume 1 is out in August on DVD 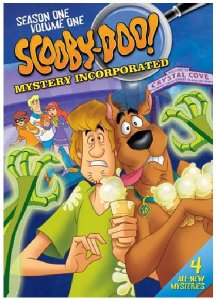 The world's favorite mystery-solving hound, Scooby-Doo!, is finally back with a brand new series of hair-raising adventures in Scooby-Doo! Mystery Inc - Vol.1, available on DVD from 29th August, 2011 courtesy of Warner Home Video

The melancholy village of Crystal Cove has long since boasted a history of frights such as ghost sightings, mischievous poltergeists, demonic possessions and other creepy coincidences. When Scooby and the Mystery Inc team arrive to prove these happenings are of a far less ghastly nature, the village rejoices - until the gang uncovers a creepier complication that threatens to change everything.

Packed with Scooby-Doo's trademark wit and energy, featuring the classic characters of Fred, Daphne, Velma and Shaggy, all of whom join Scooby-Doo while he cowers in the background, Scooby-Doo! Mystery Inc - Vol.1 is the perfect addition to any fan's collection and also the perfect opportunity for new fans to get on board with one of most legendary and nationally loved animation franchises ever.

What's more, Scooby-Doo! Mystery Inc - Vol.2 is released on DVD later in the year, allowing fans to spend a fabulous summer in the company of the world's most famous - and most cowardly - investigator!

Producing for network and cable television, online, home entertainment and feature films both domestically and internationally, Warner Bros. Animation is highly respected for its creative and technical excellence, as well as maintaining the studio's rich cartoon heritage. Warner Bros. Animation also oversees the creative use of, and production of animated programming based on classic animated characters from the Hanna-Barbera and DC Comics libraries. Warner Bros. Animation is one of the most honored animation studios in history, garnering a grand total of six Academy Awards®, 35 Emmy® Awards, the George Foster Peabody Award, an Environmental Media Award, a Parents' Choice Award, a Humanitas Award, two Prism Awards and 20 Annie Awards (honoring excellence in animation).