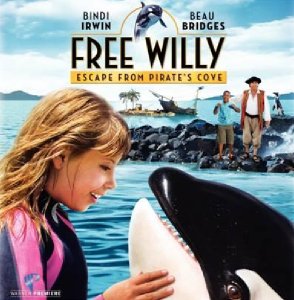 On DVD, on demand and download from 2nd August 2010

If you fell in love with Free Willy the first time around, then you're going to adore FREE WILLY: ESCAPE FROM PIRATE'S COVE, a brand new adventure from the much loved and hugely popular Free Willy franchise with an entirely new cast. One of the most popular family franchises ever, the first Free Willy movie launched back in 1993, and has sold in excess of 1.15M units on DVD & video in the UK alone! So FREE WILLY: ESCAPE FROM PIRATE'S COVE is the perfect chance for a new generation of fans to join in the fun with their very own adventure.

Join young adventurer Bindi Irwin (daughter of crocodile hunter Steve Irwin) in this, her feature film debut. A wonderfully family-friendly and heart-warming story of a girl who rescues an endangered whale, FREE WILLY: ESCAPE FROM PIRATE'S COVE sees Bindi starring as Kirra Cooper who is reluctantly spending the summer with her estranged grandfather (Beau Bridges - Stargate, My Name is Earl, Charlotte's Webb) at his run down amusement park in South Africa. During her stay, Kirra rescues a young Orca whale that has become separated from its family. Quickly bonding with the orphaned creature who becomes a much needed friend, Kirra soon realises that she must fight to reunite him with his pod and free him from a life as a tourist attraction.

Get set for an all new adventure full of new friendships and the excitement and challenges that they bring in FREE WILLY: ESCAPE FROM PIRATE'S COVE available on DVD, on demand and download from 2nd August 2010.

Come and visit the official Free Willy website for some fun extras and wallpapers - http://wwws.warnerbros.co.uk/freewillyescapefrompiratescove/

Also available as a great value collection: FREE WILLY: COMPLETE 4 MOVIE COLLECTION. This is entertainment for the whole family.
ENDS